Fascinated as I am by motorcycles and popular culture, I shouldn’t have been surprised. But I was. 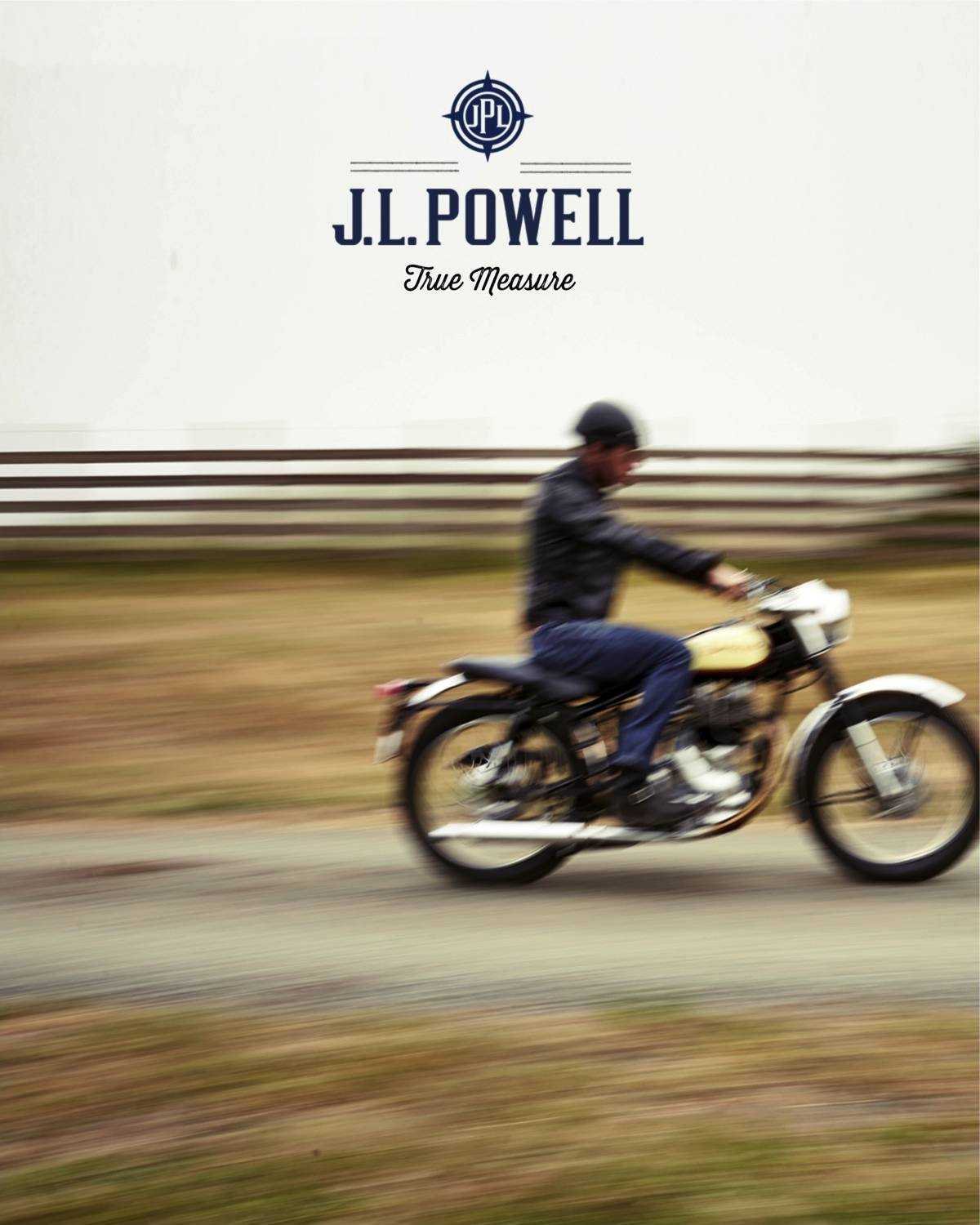 I opened my mailbox and found the first of the fall J.L. Powell catalogues. The cover features a man riding a vintage motorcycle along a rural road. There is no question the rider is male: since 2007, the Petaluma, California-based J.L. Powell has offered clothing and accessories to older, wealthier men who lead, or like to imagine they lead, a rugged, outdoorsy lifestyle. The company itself caters only to the U.S. market.

And a motorcycle itself was not that much of a surprise. Motorcycles have become increasingly prevalent in popular culture acting as props for everything from retail display to fashion advertising. The motorcycle/motorcycling/motorcyclist has become a semiotic sign signifying any number of things depending upon the context: youth, loner, artist, hipster, manliness, youthfulness, independence, and individualism, among many other meanings.

A Triumph figures prominently in one part of Giorgio Armani’s Fall 2013 Frames of Life campaign for his line of designer ‘eyewear’. The four ‘frames’ or anecdotes all take place in Barcelona’s Plaça Reial (Plaza Royal), a square in the Barri Gòtic, near the popular and fashionable La Rambia, a well-known tourist attraction. The location alone is loaded with implications of hip and cool, of glamour and the glamour industries. On the other hand, it is just an amusing coincidence that one of the Plaça Reial’s better known nightclubs is named Sidecar. 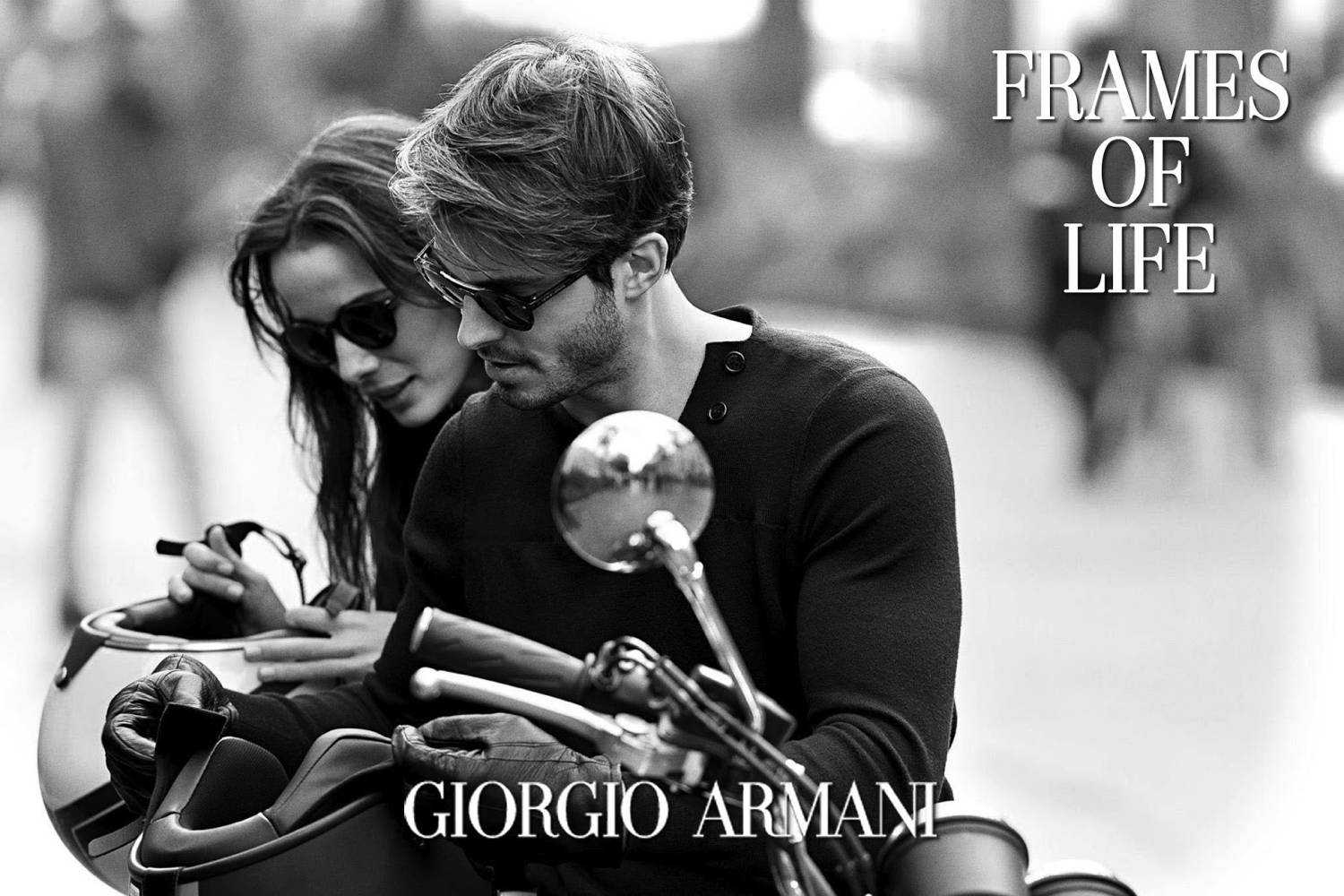 In the one minute black and white promotion titled Lucille & Adrian: Lovers, Adrian makes his entrance astride a Bonneville, wearing a three-quarter helmet and seriously retro La Dolce Vita dark glasses. He’s there to pick up Lucille, who is introduced going over plans in an architect’s office where presumably she works.

As Jun Miyake’s new-cool-meets-old-school Lilies of the Valley continues on the soundtrack, off they go. While his helmet is black with white stripes, hers is white with black stripes. Lucille rides pillion. That Adrian would ride pillion with Lucille in control is unthinkable in Armani-land. It would send the wrong message. What the company might think of architect and around-the-world motorcyclist Elspeth Beard is anyone’s guess. 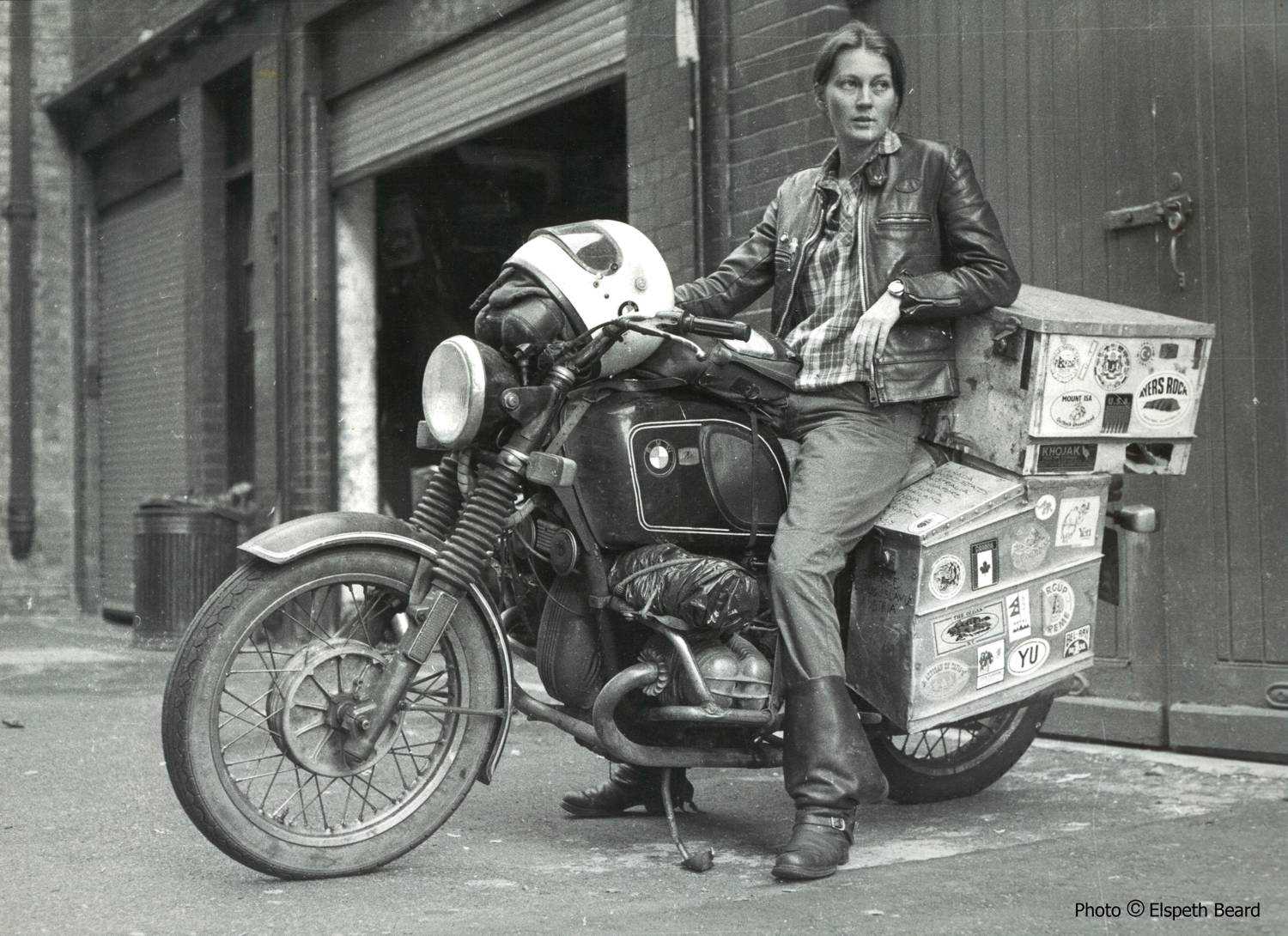 The lifestyle frame follows them riding to the 19th century square with its Catalonian art nouveau details. They are seen next inside a semi-gutted space, both now wearing clear or normal glasses with retro designed frames. They are looking at more plans and elevations, a Pantone color guide by their side. Another shot indicates the apartment has a view of the Plaça Reial itself. Ah to be rich young architects in love, building a life together.

Armani is not alone. Ralph Lauren’s advertising and boutiques have included motorcycles as props for years. The Rugby shop near me once featured a red vintage bike that almost made the over-stylized Ivy League look that is the signature of the line look a lot more appealing. Here motorcycles were one of the elements of the extracurricular life of the university student. None of the displays indicated that one might actually attend class, let alone study for an exam.

Nor is J.L. Powell the only catalogue I have ever received using motorcycles as props. Not only has Pendleton Woolen Mills’ catalogue featured motorcycles to help illustrate men’s fashion, but also has it developed a co-branding project with Ural USA: The 2013 Gaucho Rambler.

The Gaucho Rambler is a motorcycle and sidecar in a rather cheery blue that the company pitches, “With nothing more than their horse, a knife, and a poncho, the cowboys of the Americas, or gauchos as there [sic] known elsewhere, rambled through the country, living off the land, taking each day as it came, always on a journey towards the sunset. The rebel spirit of the gaucho is very much in the heart and soul of each Ural”. Keeping both heart and soul warm is a Pendleton Journey West blanket, included with the purchase of the Gaucho.

The reality behind the romance is that both gauchos and cowboys are hardworking, and neither are particularly rebellious. Despite sleeping under a Pendleton Chief Joseph blanket for years and having a gaucho knife somewhere in my mess, it wouldn’t have occurred to me to mix the traditions, let alone that they were in some sense the same tradition. Nevertheless, they become ways to evoke a mood or tone of the allure of the wide open road and wide open spaces. 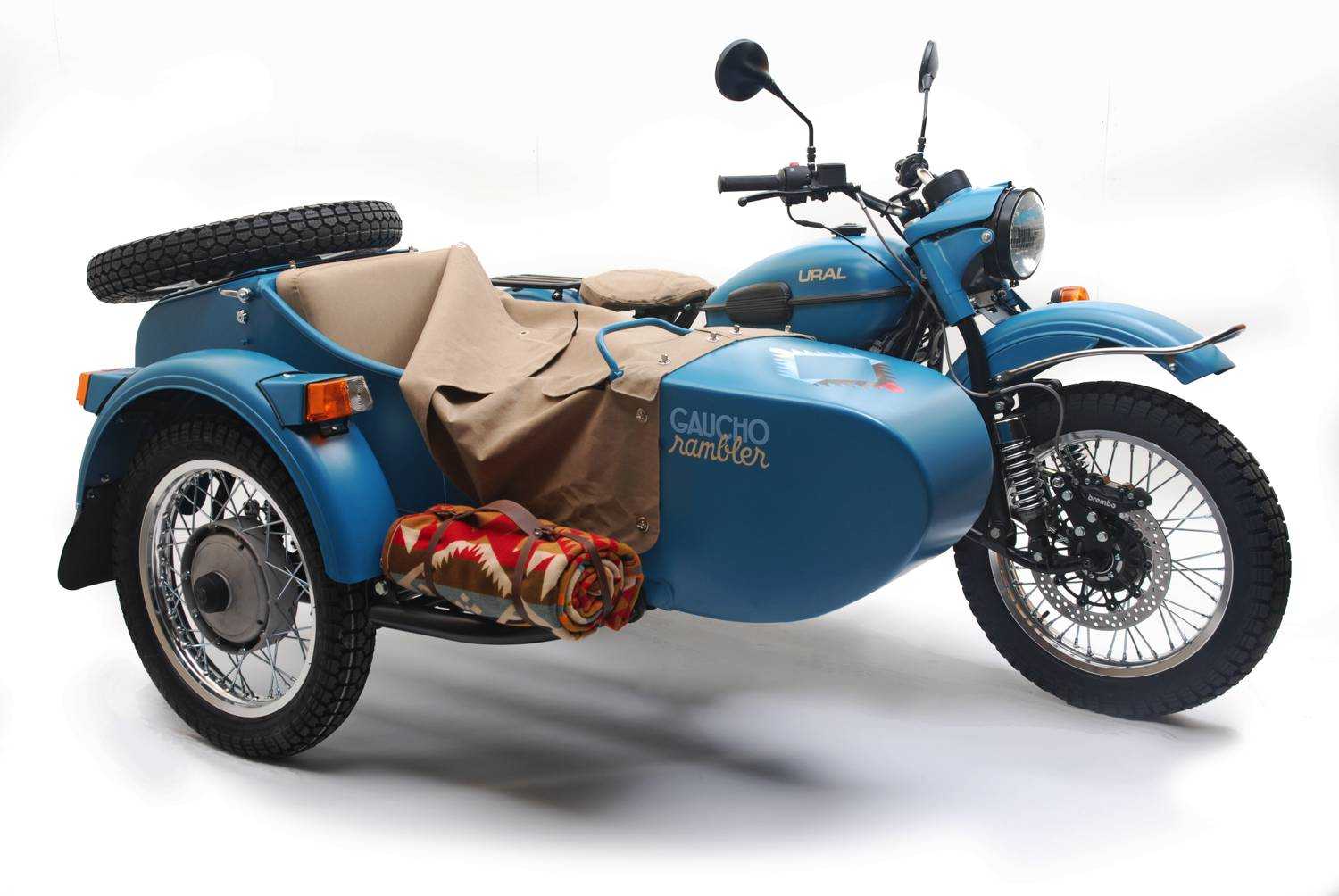 No, the surprise came when I opened the catalogue. There he was on page 3: Ted Simon himself. J.L. Powell isn’t exactly sending a sign that motorcycles make for a neat weekend romp. What was going on here?

According to Trevor Pitchford, the in-house copywriter for the catalogue, refreshing, if not re-branding, J.L. Powell is what’s going on. Pitchford is an avid rider himself (his 2001 Triumph Bonneville makes a cameo appearance on page 2 of the catalogue). He’s also interested in finding old bikes to restore on Craigslist as well as a huge fan of Simon’s books. Pitchford was amazed that Simon could travel 78,000 miles on a motorcycle built in the 1970s (one of the last of the Triumph Tigers). Regular readers of my motorcycle and popular culture columns may well surmise my pedantic response, starting with Carl Stearns Clancy’s 1912/1913 around the world trip on a Henderson.

Pitchford took his bliss and his passion, and pitched motorcycle travel and vintage motorcycles as the “editorial story” to J.L. Powell. Apparently it resounded with the group. “They responded to the trip to their cores”, he said. 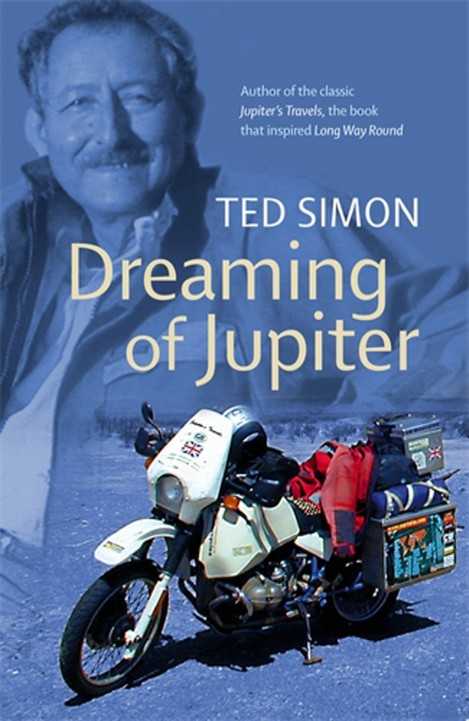 Simon was quickly contacted to sell autographed copies of his motorcycle travel books through the catalogue (and the website). Simon not only autographed the books, but also delivered them personally, in effect becoming his own dispatch rider.

Pitchford explained that the editorial story of motorcycling will continue throughout the fall season, each catalogue filled with photographs of a friend’s 1952 Royal Enfield Bullet. Future chapters or catalogues will focus on finding and buying vintage motorcycles or tinkering with bikes when it’s too cold out to ride or he has to be “home for the holidays”.

As for the first catalogue in the series, motorcycles are used in general copy and photos as well as product shots and descriptions. The Bullet is the star. It’s seen zipping along country roads, over hills, past open fields, misty lakes, the rider sometimes sitting in the saddle, sometimes standing on the pegs, his face never clearly seen even when he is modeling one or another J.L. Powell product (p.39; p.41). The jaw however is always fashionably scruffy. 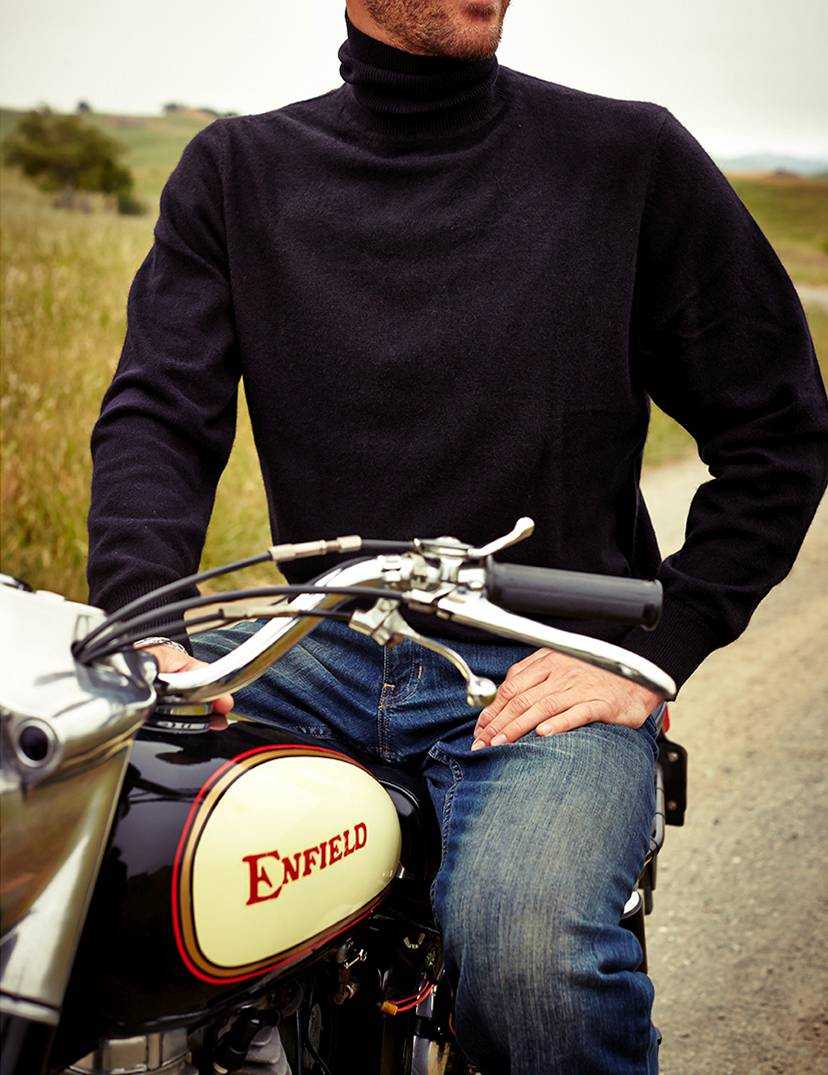 Copy evokes both vintage motorcycles and adventure travel, both of which are expensive hobbies, implying the wherewithal to indulge. Following the headline, “For me, 50 miles an hour is a perfect speed…”, the opening paragraph of the catalogues narrative reads, “It coughs and backfires on chilly days, smells of raw gasoline and hot oil, and vibrates like a son of a bitch at high speeds. But you’ll ride it for the rest of your life because the simple thrill of the open road is hard-wired into your DNA – and nothing stokes it like a fast run on an old bike. That spirit of adventure is woven into every piece of clothing we design. It’s for guys that appreciate the timeless value of tradition, hand-craftsmanship and extra detail. Because chinos, bomber jackets, buckle boots and old motorbikes come from the same place and time (p.3)”. Authenticity is always in another time, another place, another motorbike.

That quote is juxtaposed against a sidebar titled “Side Tracks”. It’s a table of contents for where Simon’s books and foundation are pitched. The heading for the first one is “Once around the world…”; the second, “…and back again”; while the third reads, “Now it’s your turn”.

The actual pitches for the autographed copies of Simon’s books are straightforward (p.17; p.31). The only questionable point is the assertion “[Jupiter’s Travels] is simply the best motorcycle travel book ever written”. While I cannot imagine anyone questioning Simon’s position among the top ten motorcycle travel writers to date, there is some debate as to which of Simon’s two books is the better one. Simon incidentally has also published a handful of books on other subjects. Regardless, Pitchford hasn’t read enough of the genre to make that statement with any authority. The third (p.47) is a pitch for The Ted Simon Foundation and includes the URL.

While Simon seems to enjoy J.L. Powell’s explicit endorsement, it only receives Simon’s implicit endorsement in return. His Foundation’s website does not seem to include a link to J.L. Powell (nor does Pendleton mention the Gaucho in either its website or its catalogue, by the way). 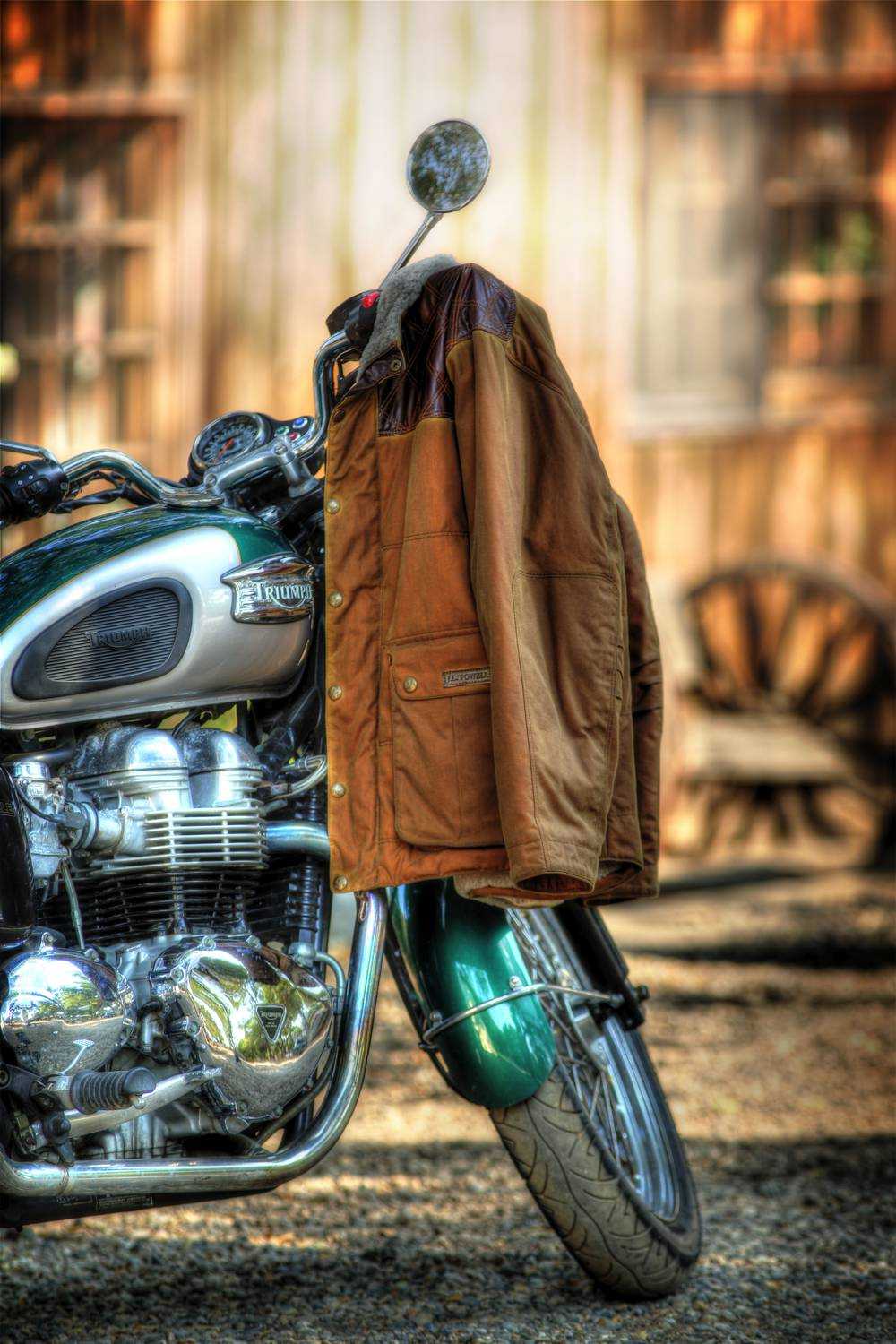 Product names and descriptions are full of references and allusions to the world of motorcycling. There’s the Two-Lane Bracelet (p.4) and the Upshift Silver Cuff (p.31). The Lane Splitter Jacket is made of genuine horsehide (p.51). The copy alludes to the differences between those who look like motorcyclists and those who are. “If you like buckles, flaps and snaps on motorcycle jackets, you’ve probably never ridden a motorcycle. They create drag, man”.

Film and actors are also brought in. Marlon Brando and The Wild One are referred to in the copy about the 1940 Original Engineer Boots (from the Chippewa Shoe Company). Steve McQueen, a motorcycle racer as well as an actor, is cited in the copy for The Black Cashmere Turtleneck (rollneck), but although the inspiration seems to have been the film Bullitt, known for its four-wheel, not two-wheel, mayhem, the accompanying photograph shows a model in the turtleneck astride the Enfield Bullet. 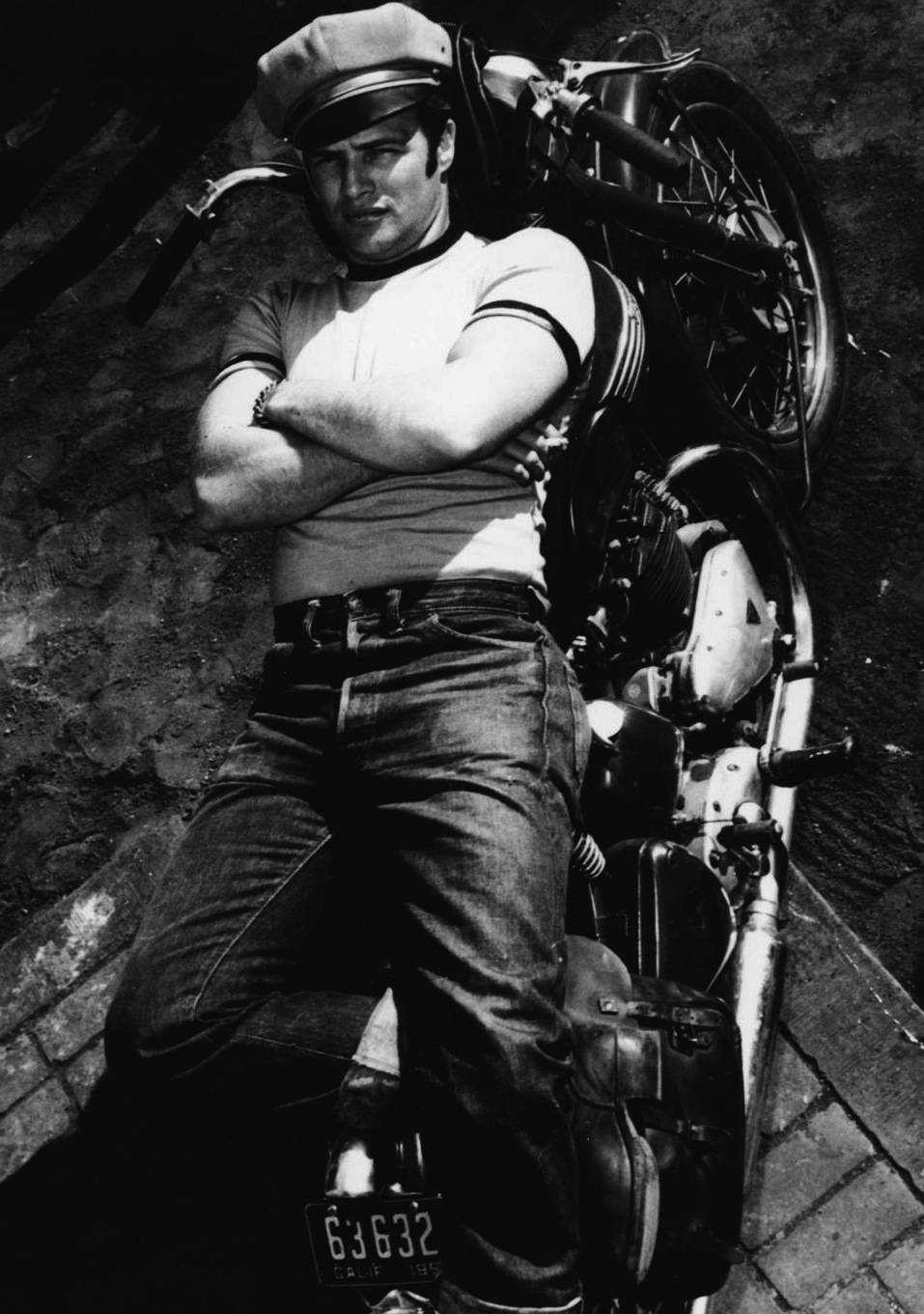 Most of this breeziness is harmless even when it gets silly: the product offering on page 23 is titled Back In The Saddle Shoes. Elsewhere it becomes counterproductive. The Lost Weekend Bag (p.6) brings to mind an old movie. While I haven’t seen Lost Weekend in years, if memory serves, the only bags in it were under Ray Milland’s eyes. Odder still is the Route 50 Jacket (p.15) with refers to such mountain trappers as Kit Carson and Jeremiah Johnson. Jeremiah Johnson, or more correctly, John “Liver-Eating” Johnson (né Garrison) was among this country’s more curious cannibals. Not a good sign/signifier even if it’s supposed to evoke the leisured ambiance of the Rich Urban Biker and wannabe RUB.

The follow up catalogue does indeed continue with the motorcycle theme, but here focuses on finding and riding vintage motorcycles. No mention of Simon or Jupiter. But as the copy in the first catalogue notes (p.20), “The only Ted Simon I knew was the one who moved on”. 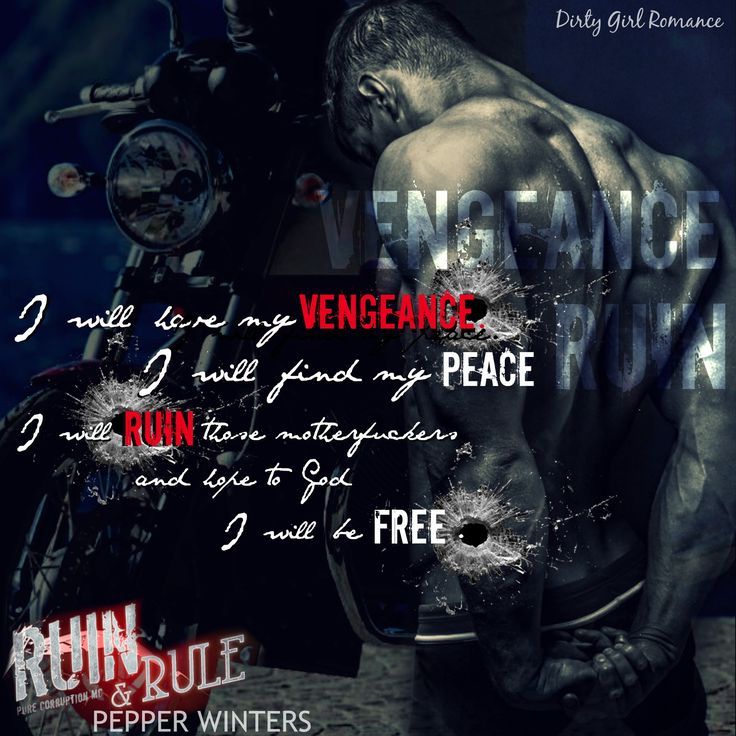 Mad, Bad, and Dangerous to Know

Book Review – Of Tourists and Travelers 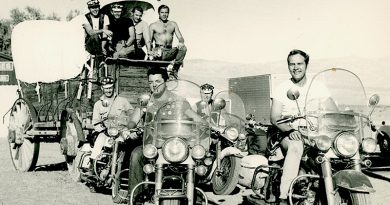 Longing and Belonging: Toward a Cultural History of Gay Motorcycle Clubs in the US