As a bird of childbearing age, the monthly merry-go-round of rising and falling hormones is a familiar one. Menstruation – just one week of the cycle – has got to be one of society’s last standing taboos. 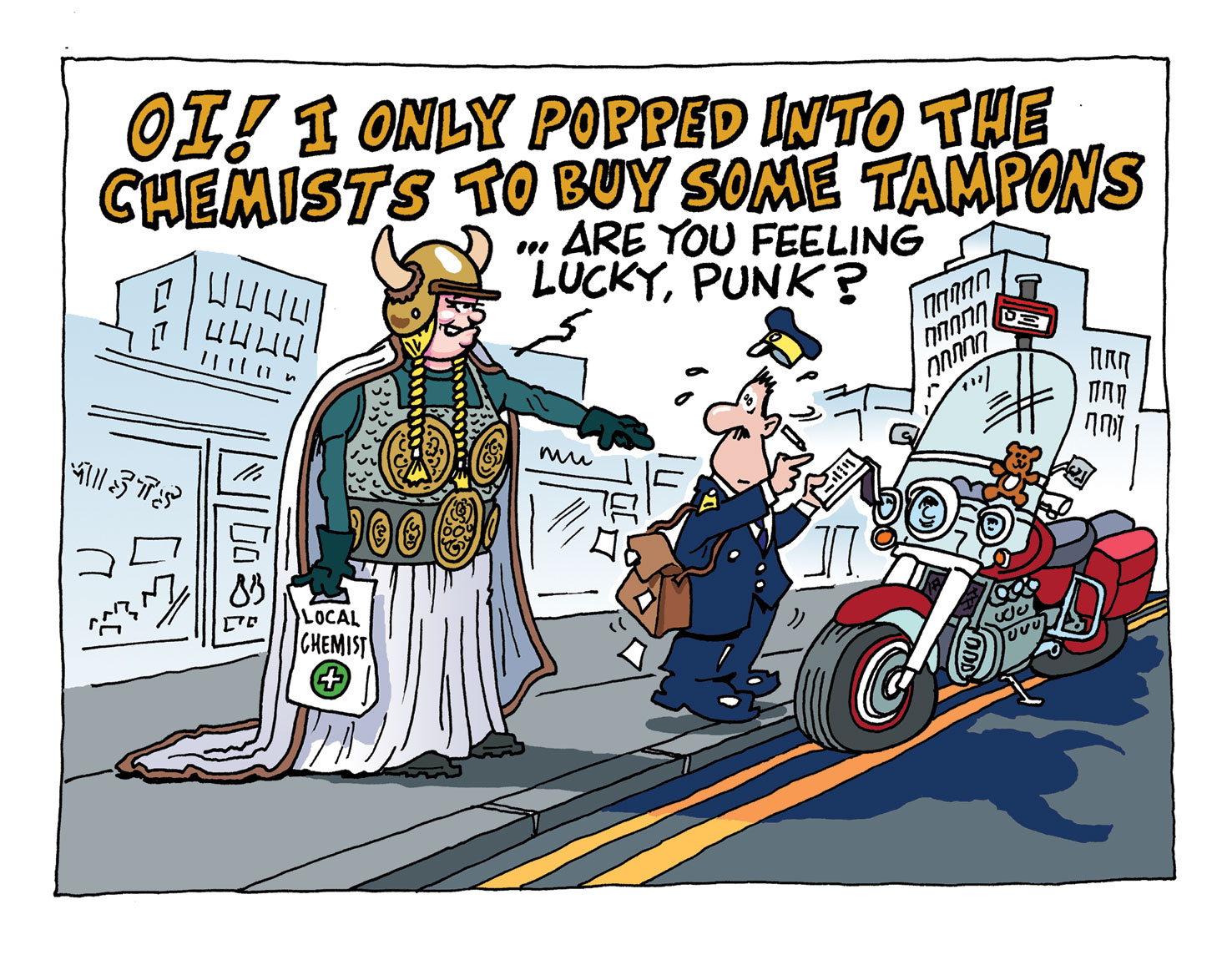 In many parts of the world, being on the rag is second only to being spawn of the devil. Here in the West, we might have ‘Argh, Bodyform’ adverts on the TV but we are still pretty coy when it comes to relaxed open discussion about the ups and downs of the healthy female reproductive system.

Men have come up with some inventive code phrases to facilitate understanding, for example, having the painters in, Granny’s staying over, the wife has ‘broke down’ (not in the nervous sense)… but still, I think, us girls are reluctant to bring the issue out into the open, perhaps because we don’t want to give the guys any more reasons for not letting us do stuff.

Throughout the 28-day cycle female chemistry goes through some pretty radical changes. To know this, and not expect some fairly major reactions is a bit naïve, but women have been doing this forever. In our struggle for equality and freedom we have denied the impact of our natural cycle on our abilities and perceptions, and vigorously shouted down anyone who wanted to talk about it.

Obviously, if I thought for a minute that my hormones were a handicap I wouldn’t be writing this. To acknowledge its influence isn’t giving in to it; it’s working with it, rather than against it.

Research into the whole area has been as affected by cultural taboos as the rest of us. It is only relatively recently that scientists starting investigating the physiological effects of the various hormones involved, rather than just writing off female subjects as useless for experiments because we are too unreliable and moody. A great deal of the most recent research has been done in the sports sector where performance predictability is so important.

A common symptom of PMT is clumsiness and lack of coordination. Lots of women experience this to varying degrees and it’s nothing if not frustrating. 24 days a month I have absolutely no problem at all going through a door; for 4 days a month however, it’s mission impossible, as I consistently misjudge where I am in relation to the doors’ space. Last summer I did 5000 miles on a motorbike and gained not one cut or bruise as a result. During this month long trip I also got PMT and nearly put my self in hospital getting out of bed in a youth hostel – alright it was the top bunk, but it wasn’t that difficult and there was no reason at all to smack my head on the opposite wall.

The reason we get accident-prone at this particular time of the month is thanks to a hormone called Relaxin. You’d think, with a name like that, Relaxin would be the hormone of choice, but think again.

Our physical coordination relies a lot on something called Proprioception, which is a posh word for knowing where you are in space. We know it’s working when we reach for a mug of coffee and just the right bit of our fingers curls round the handle, or when we take the stairs and get to the top without tripping. The key to good proprioception is your brain being absolutely up to date with where our fingers and toes are. Usually, our fingers and toes are in the same place from day to day, but for us girls this changes at certain times of the month when Relaxin is working on our ligaments. Ligaments connect your bones and normally aren’t stretchy at all, but Relaxin changes all that. Relaxin is dead useful when you are trying to squeeze a bowling ball out of your ass, or have a baby perhaps, because it loosens all the ligaments in the pelvis and makes everything a bit roomier. When you’re not having a baby though, all it really does is make your limbs a little longer and your joints a little bit looser, so your brain suddenly has no idea where your appendages end anymore. This means coordinating your body, or just a limb of it through space becomes a much more hit and miss affair.

Female athletes are dramatically more at risk from over-stretching injuries in this part of the cycle.

High levels of Oestrogen, which happily occurs at just the same time your body turns into a rag-doll, tends to slow down your reaction times. So you can see quite clearly that you’re going to put the glass down on thin air, and not the table top as you’d planned, but you can’t react quick enough to do anything about it.

One of the earliest studies, done by Whitehead in 1934 found that female pilots were more likely to crash when in this phase. In 1964, Dalton found that more than half the women admitted to hospital after accidents were in the same gremlin-ridden phase of their cycle. 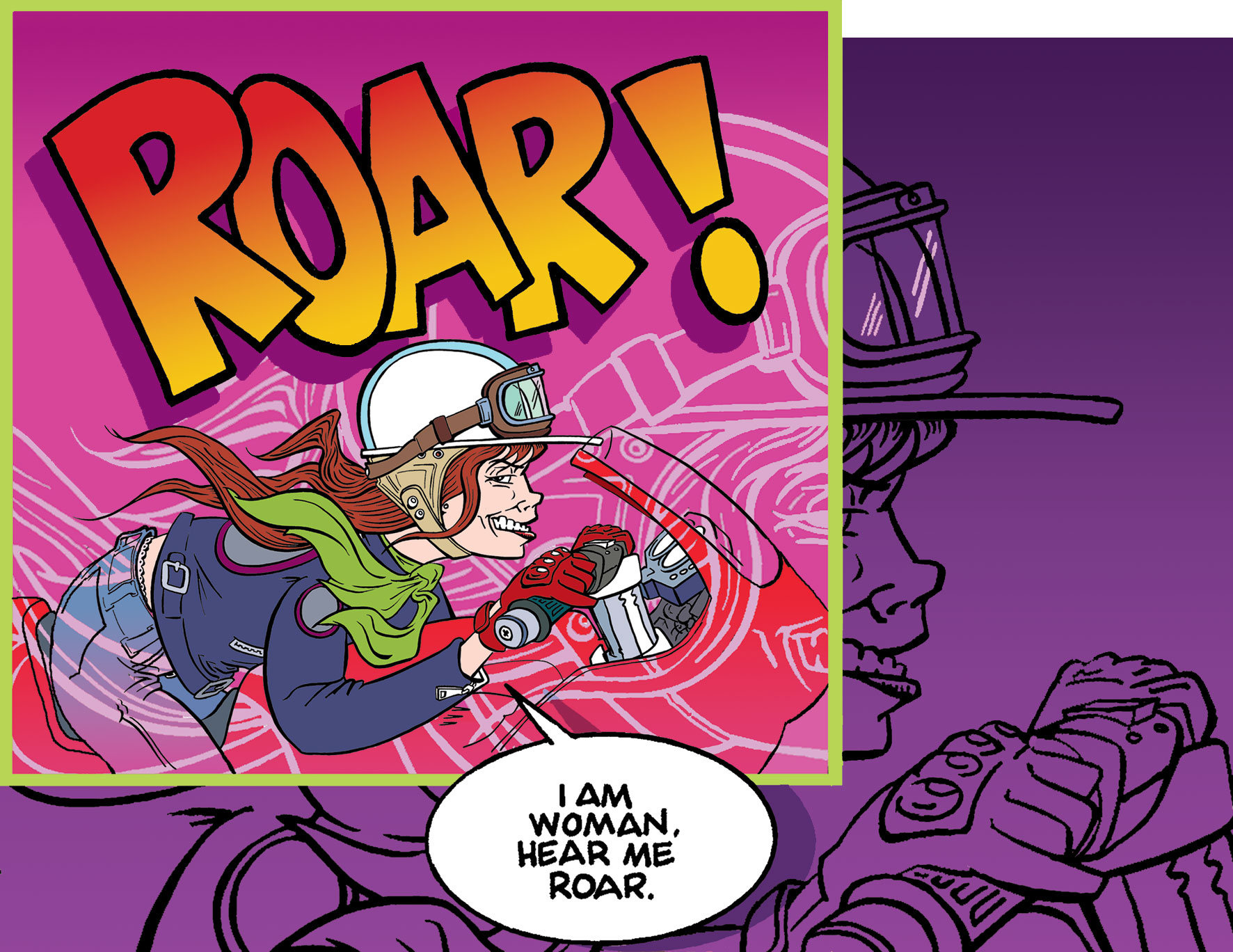 If you happen to earn your living sitting at a computer doing data-entry then this is probably not a big issue, but when your days work is based on fast accurate judgement of speed and distance, like being a courier, then going out on circuit with bad PMT is like trying to do the job wearing glasses prescribed for a wall-eyed fish. For all female despatch riders this is the situation for a few days every month. Not that we’d ever tell you guys and let you think you had some kind of advantage.

We tend to make no allowances for our fluctuating hormones and neither does society, but this is stupid. When it’s winter and we’re feeling cold, we turn the central heating on. We constantly make adjustments to our changing external environment, but us girls particularly have a habit of blatantly ignoring our internal one. Perhaps women could learn a lesson from the boys here. I’ve never met a man with the merest sniffle who didn’t make sure all allowances were made on his behalf. Our hormonal cycle isn’t a sickness, but it affects us significantly – we should stop trying to soldier on regardless.

Your hormones are not a psychosomatic figment of your imagination. You change physically and measurably. As human beans we are excellent at adapting to changing circumstances but these monthly changes tend to come and go in a matter of days and there is little time to recalibrate the grey matter. Knowing this, are you still going to charge around at the same pace? And if you do are you going to be surprised if you hit something unexpectedly?

The key to using this knowledge is not about putting your bike away for a few days every month – its simply about factoring you into your riding plan, the same way you factor in the homicidal maniac in the Taxi (who I’d like to point out, probably doesn’t have hormones as an excuse). We should all be doing this on a daily basis anyway, male or female, for we are not robots. Our state of mind, health, stress levels etc are all in a constant state of flux and all these things have a profound effect on our safety when charging around on motorbikes. Women possibly have fewer accidents than men already, because we are used to dealing with and paying attention to these regular variations and accord due respect to our changing abilities as riders.

Once this phase is over, of course, and your body returns to its usual shape and length, you girls will be flying again, quicker than ever. Ed Moses was a 400m hurdler back in the 70s and he was so far ahead of the rest it was embarrassing. No one could touch him. He put his extraordinary success down to his training methods. He’d practise with a 50kg rucksack on his back. That was it. No drugs, no fancy routines, just 400m hurdles with a great big heavy rucksack. When he went into competition he left the rucksack behind and then he almost flew, running as if he were used to a planet with heavier gravity than this one. So despatching with a hormonal disadvantage is hard work, but then doing the same thing without is joyfully easy; see you in my mirrors, chaps.

It’s a shot in the dark, but I’d hazard a guess that men are more concerned about why women get so flipping short-tempered and irritable at this time of the month, than they are with tiny changes in how long our arms and legs are. Blokes often complain that they suffer from PMT too and yes, possibly our partners do tend to take the brunt of our frustration, which accounts for why they usually end up skulking around for a few days trying to stay out of trouble.

Perhaps understanding the causes of all this ‘inexplicable’ grumpiness might make the whole thing easier to deal with. Its fairly simple: just when our pain-receptors are at their most sensitive we become a thousand times more likely to stub our toe on your great big bike boots that you left in the middle of the hall. Again. Remember that for the rest of the month we are successfully stepping round your Sidi’s, and then probably picking them up and putting them tidily in the corner. However, on these few days, having already burnt our finger on the oven, smashed our favourite mug and bashed our head on the cupboard while making dinner, all the while feeling more tired than usual and still having done a normal day at work, well, then when I do stub my toe I’m going to holler long and loud. If it happens to be your boots that got in my way, then it’s you I’m going to holler at. Is that really so unreasonable?