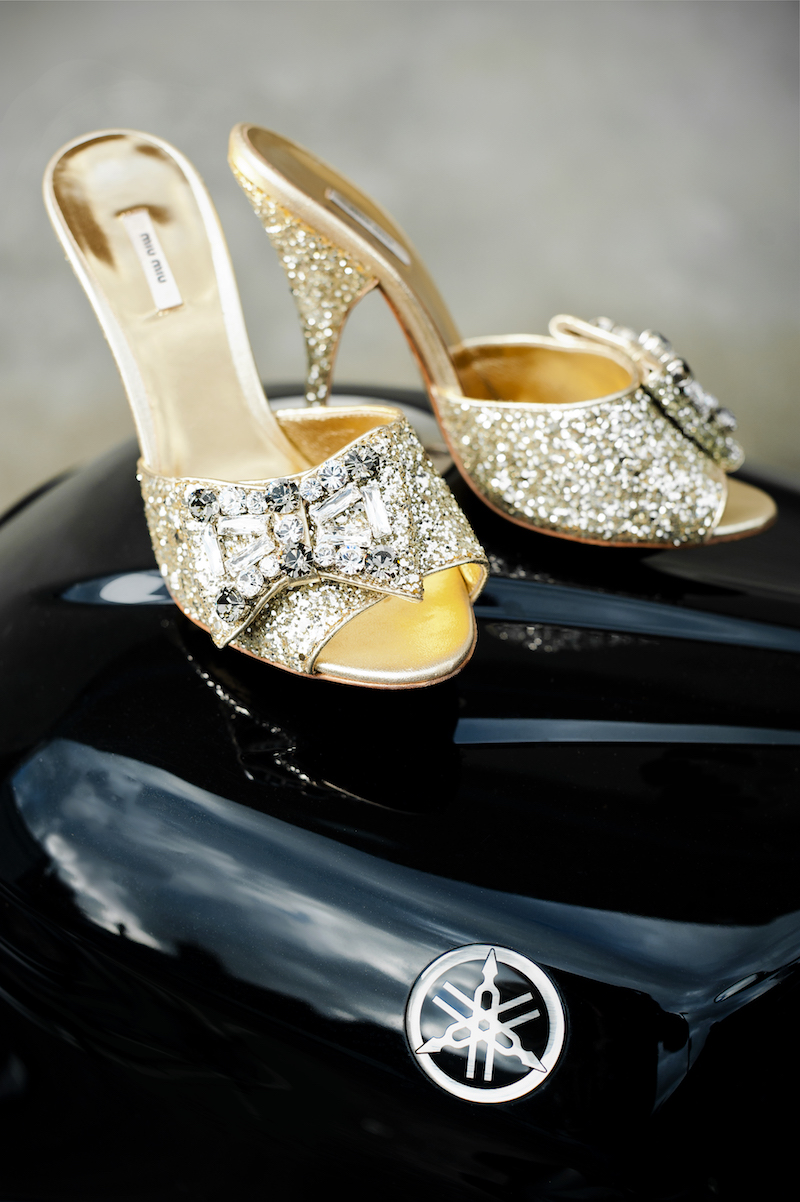 Taken the 6 in for its MOT. I cannot believe that I have actually remembered to get this done before the old one runs out! And it’s not even the New Year… yet.

Anyway, having a good old catch up with the boys at Russell Motors when their Michelin rep turns up. He joins in the conversations, as do many of the other bikers turning up and jumping the queue ahead of me!

It transpires that this rep had been to a gay bikers rally in Brighton the weekend before and despite the poor weather, there had been a fantastic turn out and a great atmosphere. Made all the much better by said Rep giving out free key rings with a miniature Michelin tyre on it.

“Apparently they loved them – thought they looked like cock rings”

I have to admit, not my normal early Saturday morning conversation but hey, it takes all sorts to make the world go ‘round.

As we’re chatting away and he’s trying sell me some Michelins (what with me being a Pirelli  Corsa Diablo kinda girl) he suddenly stops and looks at my bike, gives me a hard look and then states, “You write for the Riders Digest, don’t you?”

“What gave it away?”

“Girl on a black R6 at Russell Motors – who else could it be? Me and the wife quite enjoy your column but I have to admit, we did reckon that you were a 17 stone munter in real life, just pretending to be really small and slim. But you are actually quite small, aren’t you?”

I noticed that he only agreed with my stature…

I normally use my DT for commuting as it’s light and nimble and sometimes it’s just quicker as I can get around the traffic easier than on the R6, but today I fancied 6-ing it… and what a mistake that was…

I guess I had failed to notice how non-elastic my cargo nets were becoming over the years and what with all the sliding around, on two occasions now my back-pack had nearly fallen off the back of the bike. (I have an undertray and no rear pegs so not a lot of places to anchor to.)

Having nearly lost my bag a few months ago when it slid off the back seat and fell against the rear wheel, I had resorted to using bungee cords. I find it too heavy and cumbersome to ride with it on my shoulders (‘cos I’m only little… innit?), but with so few anchor points under the bike, it can be a bit hit and miss.

Today was definitely a miss. Having strapped my bag to the back of the bike in what I thought was a secure manner, I merrily set off for home. Wanting to avoid the traffic at Sunbury Cross, I took a side road with speed bumps, and to be fair, I may have been a little enthusiastic in testing the bikes suspension over these bumps (when I’m on the DT, I try to get both wheels off the ground).

Chugging along slowly when all of a sudden there is an almighty bang and the bike comes to a sudden stop. Nothing I can do but to try and get out from under it before it hits the ground.

Luckily it’s a very quiet road and I wasn’t going that fast and I ‘manage’ the bike down as opposed to throwing it – I guess you could call it dropping with style.

Initially I thought a tyre had blown due to the noise, but on closer inspection, my back pack had come free from one of the bungee cords and the other one had pulled it down on to the back wheel where it had managed to get wrapped around the back tyre and the mudguard. The loud bang was where it had been forced down the inside of the exhaust and the bolt from the jubilee clip holding the pipe on had sheared off!

Several passers-by came to my rescue and three of us managed to get it back upright. Another very helpful chap at the T-junction opposite where I fell, parked up and left his car light shining on us ‘cos otherwise it would have been near impossible to see what was going on.

Between myself and a cyclist we managed to untangle the backpack and bungee cords from the back of the bike, which just left the free- hanging exhaust. I was quite tempted to leave it as it sounded amazing, like a Moto GP bike, but I’m sure I would have been pulled for having a totally illegal exhaust, so the cyclist chap and myself managed through brute force and ignorance to bodge the exhaust back together.

Other than a few more scratches in the fairing and a big dent in my knee, I was good to go. Got home and relayed my tale of woe to Hornet Boy.

As much as he was relieved that I was OK, he was most upset with me for being so blasé about strapping things to the back of my bike, and considering the amount of motorway mileage I do, I was actually very lucky that it had not happened whilst tanking it down the M4.

Thinking he might agree to me looking to get a more commuter friendly style of bike (and being stylish at the same time – you know me, style over substance), I started researching what type of bike I might like – and still keep the R6 and DT of course.

So you can imagine my chagrin when I presented my ideas to him, for him to say, “You’re getting a top box and that’s final”

On a sports bike??? Noooooooooo!!!