It was a Sunday morning in September and I was having a cuppa with my new biking buddy Martin at the Epping tea hut (long time distributor of the old freebie printed version of The Rider’s Digest), when he informed me that The Bike Shed were “doing another track day at Brands, if there’s enough interest”. 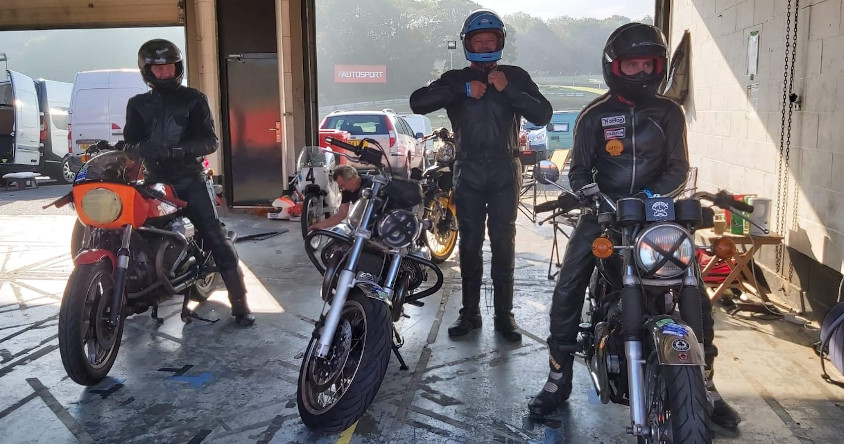 The country was just moving towards another lockdown, but some sporting events were still allowed, so there was a chance it would actually happen! After all being on a racetrack on a motorbike is largely about social distancing, so “Sign me up” was my inevitable instant response.

I will start drawing my state – or what used to be called ‘old age’ – pension’ in April; but in spite of having ridden a bike for nearly fifty years, apart from a lap of the Nürburgring on a Honda 250 G5 in 1974, I’ve never been on a Tarmac race track! On that occasion, I managed to overshoot a bend, despite the Honda’s leisurely performance; but I was young and foolish then, now I’m just old and forgetful!

Otherwise my track experience has been limited to the dirt variety; I did a few enduros in Cape Town on a Suzuki PE175 circa 1980 and much more recently a couple here in the UK with the youngsters from the Archway Youth Project; but wild horses couldn’t stop me riding around Brands.

The voice in my head said “Yes Neil you can be Roy Armstrong in the 1977 Avon Production Series!” I was tremendously excited at the prospect of Brands Hatch, where I had watched Sheene, Roberts, Mamola and even Graham Hill in an Embassy Ford F1. And the iconic track is only half an hour from my home in Peckham, so I could ride the bike there! How cool was that?

Why had I never done it before? I suppose nobody ever suggested it, so I have to thank The Bike Shed for organising these events. 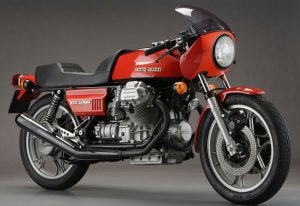 Martin told me that I’d need full leathers and a proper full-face lid; but they were minor details, I know more than enough people to beg, borrow or steal them; the important thing was that I owned the perfect bike for the task! I bought it a few years back from Ray Petty’s Italian bike shop, but it had stopped charging on the way home and languished in a lock-up in Deptford until Moto Nero in Bristol sorted it out during the first lockdown. We – me and my 1980 850 Le Mans – were itching to ride around Brands.

Excitement was replaced by fear as I started talking to track day veterans; I didn’t know that a Paddock Hill bend was ‘blind’, in fact I didn’t even know what that meant, but it sounded ominous! Another friend, Graham, told me to relax and not overthink it. He had done a bit of proper racing and sounded like he knew what he was talking about. You’re allowed to take one person with you so Graham came along as my ‘mechanic’. The Guzzi’s rear tyre was getting on so I invested in a brand new BT46 Battlax on the advice of Bob Collins at FWR (Bob’s been a serious racer in his time) and I would scrub it in on the way to the track. 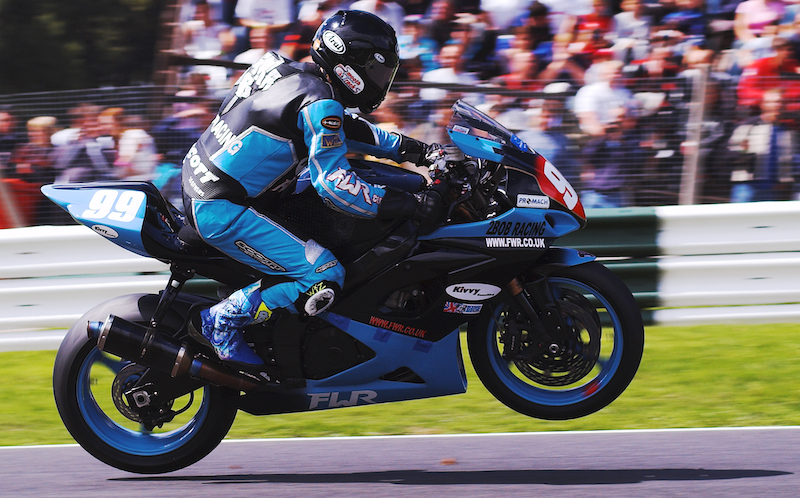 Tuesday 23rd September turned out to be a glorious hot sunny day. However it was still pitch dark when I met Martin by what used to be Blackheath tea hut. Martin is the main man at Losers MC, a tea drinking club for old bikers based on the Old Kent Rd and he turned up on his ‘76 850 Norton Commando. His mechanic Dave was driving a ‘59 Ford Consul!

We rode to Brands and filled up with full-fat 5star at the petrol station outside the track, which may be worth another mile per hour; the day wasn’t destined to be particularly kind to the environment, but it was definitely going to be fun. Graham met us at the gate and his ‘tool kit’ comprised of a foot pump and a pressure gauge.

We bagged our very own pit – it was all very much Scalextric in real life! – and I removed my side panels for fear of them flying off and clumping someone, then double-checked nut tightness everywhere obvious. Queuing for sound scrutiny I began to realise that this was actually going to happen. I was aware my standard Guzzi exhausts would pass the 110dB limit, but revving to 3,000 was pure guesswork, as my lumbering V twin doesn’t have a rev counter. Martin made a cuppa, Graham checked my tyre pressures and off we went to the start. Martin suggested that I follow him for the first couple of sessions. I had a pace man, brilliant! 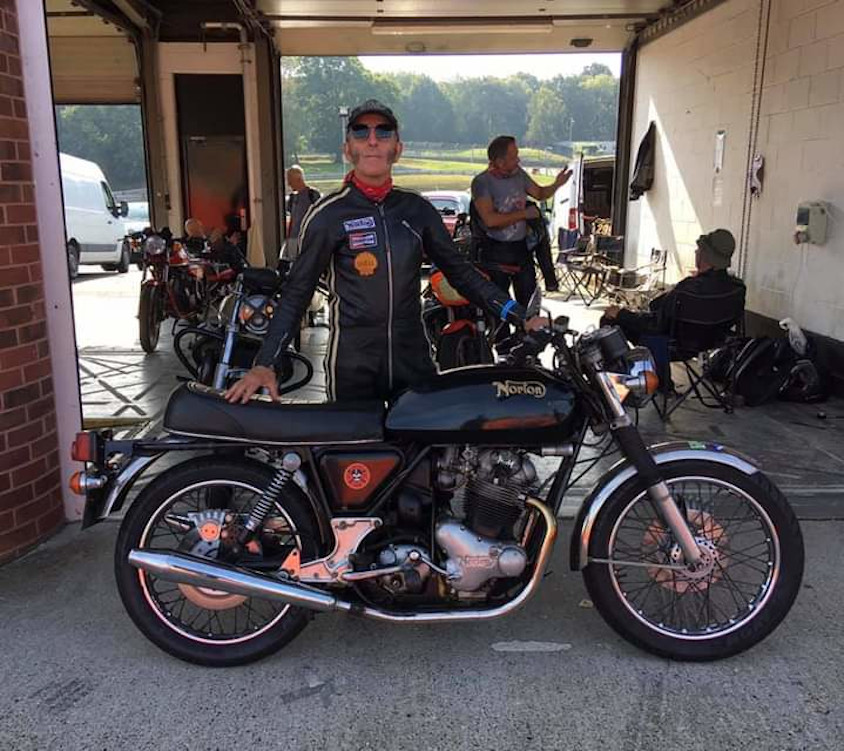 I was expecting to be riding with other classics, but I found myself lined up alongside a complete mixture of the ancient and modern. The light turned green and we were off and before very long, up, around, and coming back down from Paddock Hill bend. Blind bend what are they on about? Graham was right just relax. It was fantastic even before the second bend. Someone had kindly placed a cone at the apex of every bend to aim at, which in combination with following Martin was a massive help. Graham Hill, Cooper Straight, am I really here and doing this? Flat out past empty grandstands along the start/finish straight. Oh a red flag, that means race over for now. A young woman had gone straight on at Paddock and ended up in the kitty litter as us racers (for now, I am one!) affectionately call it. She was absolutely fine apart from a bruised ego. The thought of a low slide didn’t bother me unduly, having seen GP races getting up and walking away, but I really didn’t fancy a high side.

Martin is a sensible rider and having him there was key to safe fun until I got the hang of it. Graham checked and tweaked my tyre pressures after each session and we wound my old Marzocchi shocks up. I was shaving a few secs off my lap time each session.

This really was fun, the sessions lasted just about right, maybe five or six laps, I don’t know because I was concentrating too hard to count. Then a proper chequered flag; in for a cuppa and out again in no time. I was getting to know and love the circuit and found that I could cut down on gear changes and focus more on thrashing the Guzzi in third and fourth. Martin suggested that now that I had a bit of confidence, I should take a turn leading. I have no idea how fast I was going along the start/finish straight, because when I had the courage to glance down, the speedo needle was bouncing between 120 and 160kph. I was probably doing about 110 in real money and before long it was the notorious Paddock Hill, which I was beginning to get the hang of.

“But don’t get complacent” I heard a voice in my head say. Yes, this frolic definitely required full on concentration. It was a thrill beyond description when I swept past something modern as I rode flat out through the long curve before the back straight! 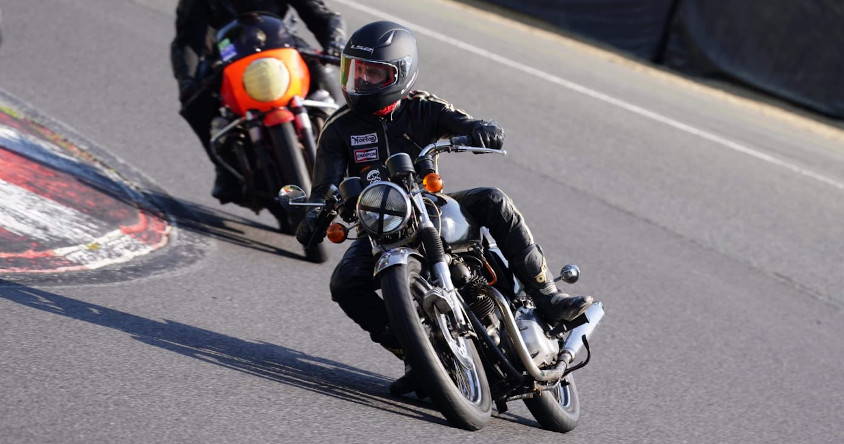 Graham attended to my tyres and beefed up the preload on my rear shocks (stiff old school Marzocchis) and my times got marginally quicker as the day progressed. My slowest lap in the last session was quicker than my fastest in the morning and my new tyres had the sought after bubble-gum appearance – and yes, they had no chicken strips.

We left for home at around 5pm, it had been one of the best motorcycling experiences I have ever had. The day had cost me £125, plus another £100 for a tyre – that still has plenty of life in it – a few litres of fuel and multiple cups of tea.

I was so exhausted, I had a bit of bother staying awake on the ride home, but I made it without any dramas. I’ve got the bug now, so I’m planning three or four track days next year including a classic one in Dijon! Who would ever have thought that my state pension would be funding such fun!

Roll on next year!

This article first appeared in Wemoto’s News pages. Credit to Lucy England for the title