During the many countless miles that I have gloriously travelled around this country (and others) by bike, I’ve been lucky enough to meet some truly remarkable people, many of whom have been lucky enough to own some seriously gorgeous bikes; so when our esteemed editor asked me to write a series of articles around the subject of “What’s in your garage?” I gleefully accepted and I knew exactly the man to start it all off. 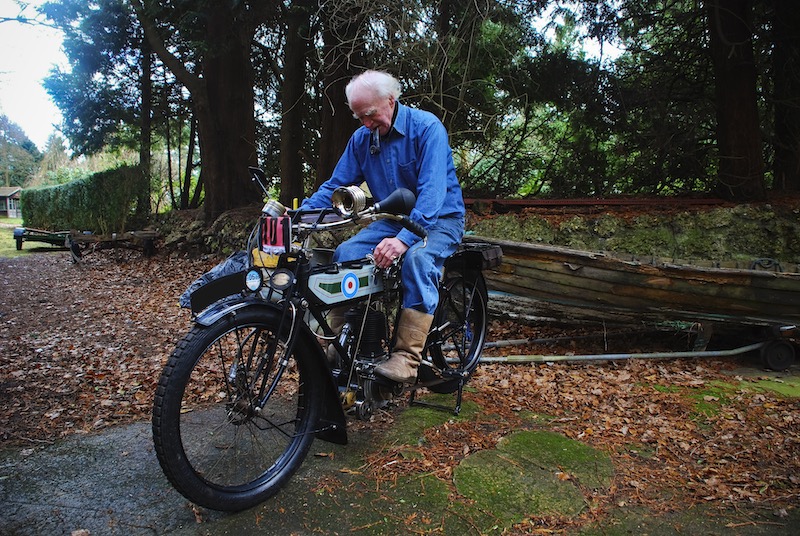 James is 80 and he lives in a fabulous house hidden in the wilds of Oxfordshire with the most marvellous collection of motorcycles. I’ve been a friend of his son for many years and had seen a few of them at various times in the past and heard rumours about some of the others. The whole family – including two other sons and his wife Charlotte – all ride and all the bikes are used in anger regularly.

We arrive in typical English weather and James ushers us into the sitting room for a cup of tea and a chat. Just walking through the house it’s immediately apparent that it’s is all about bikes. There are photos on the walls and various destroyed pistons sitting on the bar, testament to many petrol fuelled days of pure biking joy. 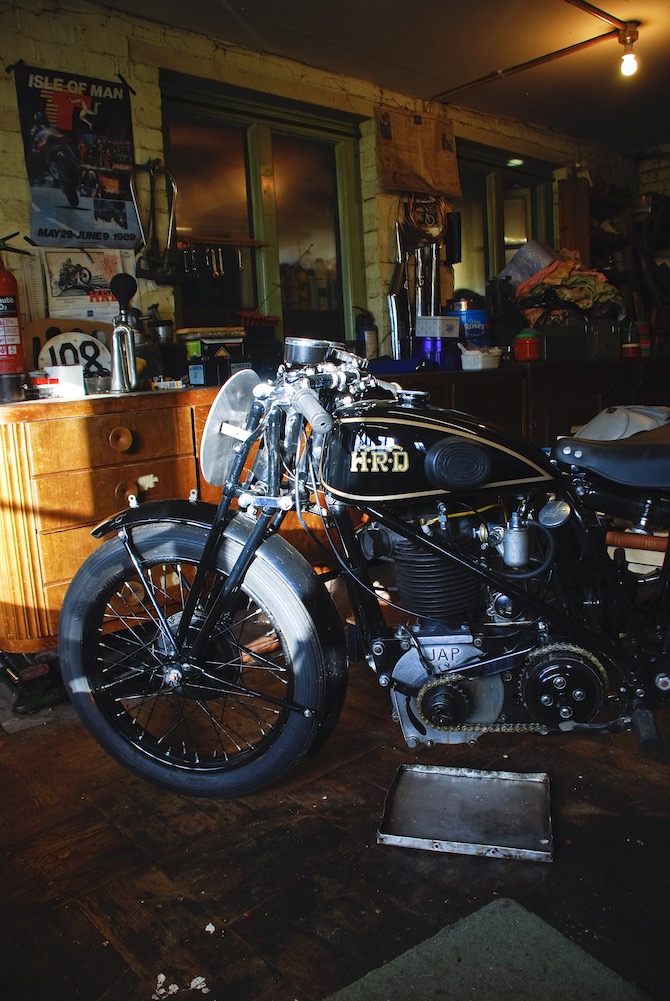 We talk about the Pioneer run, the annual event that sees bikes built up to 1915 heading to Brighton. Many don’t make it and others require some fairly serious ‘fettling’ en-route. James will be riding his 1910 Triumph 500, a bike he has campaigned on the Pioneer many times before. We discuss the difficulties encountered in riding a machine from the dawn of motorcycling on modern roads, with modern traffic. He explains how the engine is controlled by separate levers for air and fuel, rather than a throttle, how the brakes don’t work and that some bikes can only be mounted once they are actually moving and running. It all sounds wonderfully chaotic and I resolve to ride along with them at the event the following weekend. 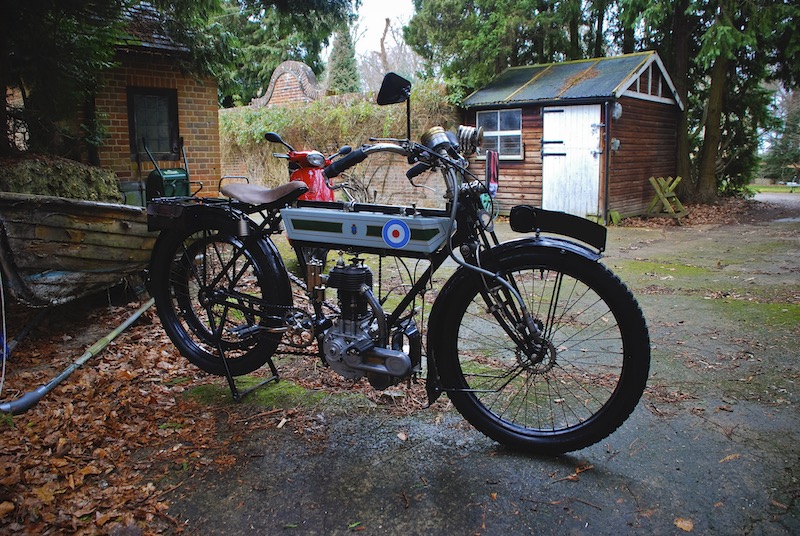 The rain abates so we wander outside and he opens the first garage. The bikes aren’t shiny perfect museum pieces, but you can tell they are used and all are in perfect running order – which is how it should be. James recently sold his Norton Commando purely because it had become too heavy for him and he couldn’t ride it anymore. Of course it was no ordinary Commando, James is a discerning owner; this was one of the first ever built, probably one of a small number of press bikes destined for America, but somehow James had found it and bought it. We later saw the bike on film, on circuit at Spa, and witnessed the frame breaking off at the headstock! I watched the wheelbase lengthen before our eyes before the whole lot was brought to a safe stop by the Armco. Later bikes, James told us, had a strengthened headstock. 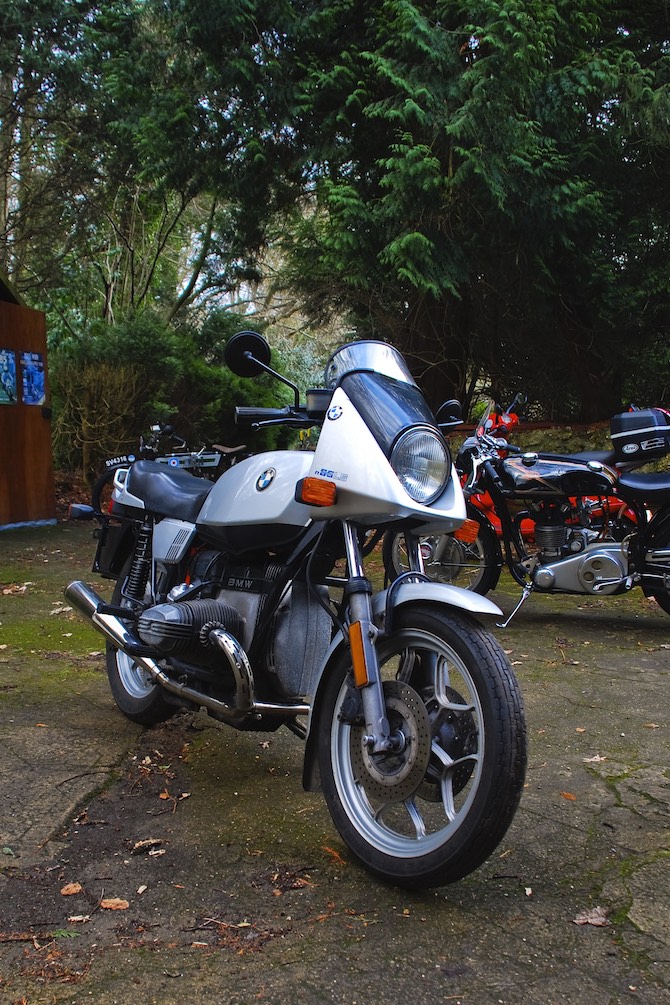 Back to the garage and I’m looking at a beautiful Aermacchi, “That bloody thing always breaks down” he tells me (which is also demonstrated later in another film of Spa). He wheels out the 1910 Triumph, it’s a bicycle with a bloody great engine and pedals! He primes the cylinder head with fuel, adjusts various levers and pedals furiously. It starts quickly and sounds surprisingly purposeful. He’s made a device that holds the exhaust collet into the head, he tells me how he hears complaints that this is not standard, but we agree that it’s better to arrive than be stranded on a standard bike. Look at the photo of the engine, valve clearances that you can actually see! 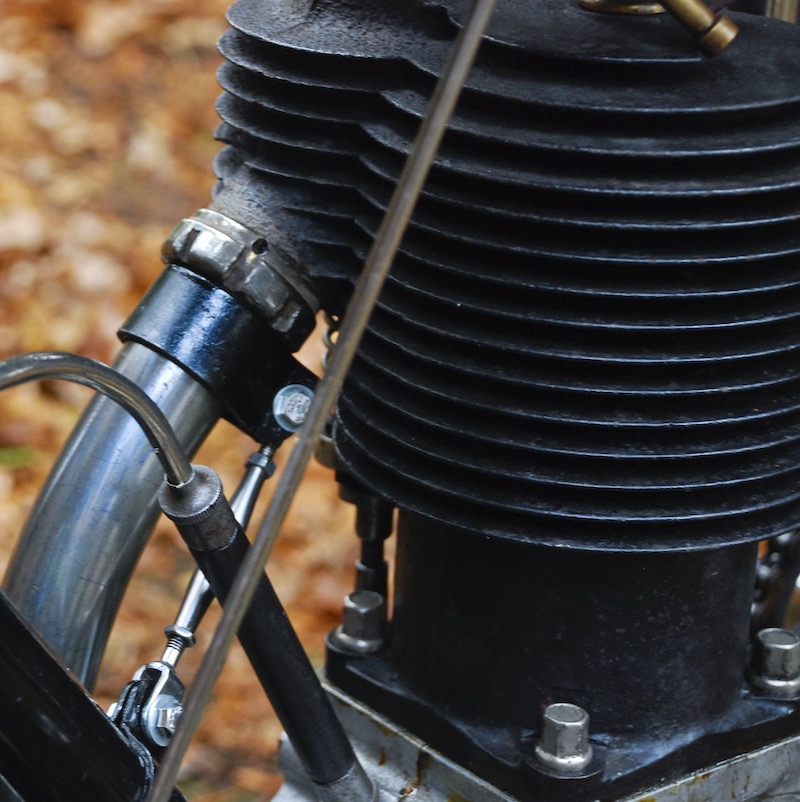 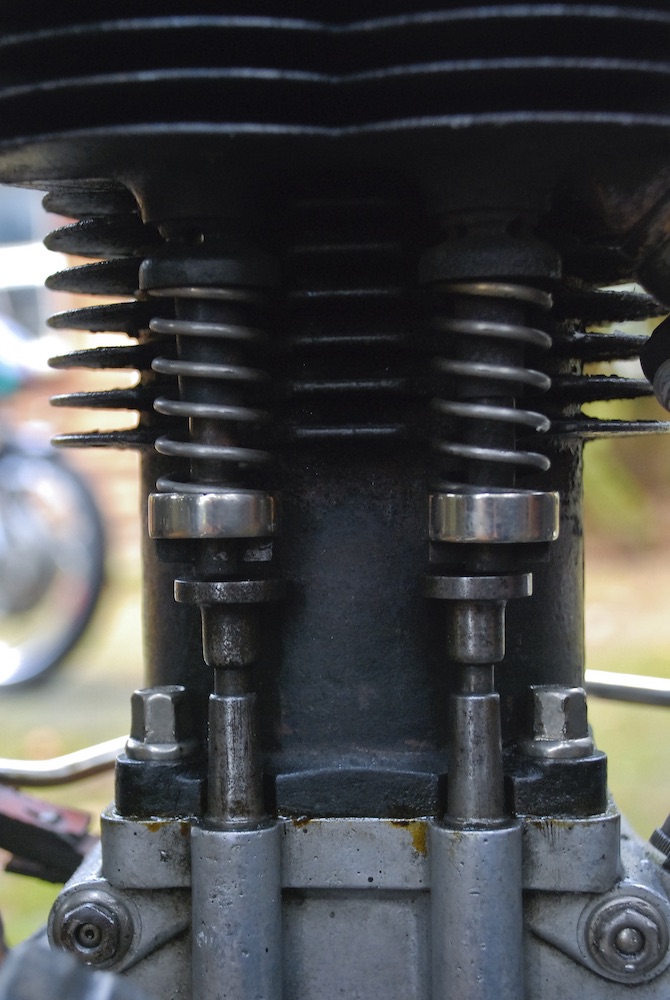 There are four other bikes in this garage, of equal interest and quality, but the one that stands out is the Japton. In days before every bike had a good frame, it was common practice to mate a great engine with a different frame, hence the Triton, Tribsa and various other Bitsas. The Japton has a Jap speedway engine mated to a Norton lowbed frame. It’s pure racing nostalgia, perfected over the years, now sporting a different crankshaft putting the capacity to 400cc’s and an oil recirculating system that is pure genius. The original engine operated a total loss oil system, but James was reluctant to waste all that glorious Castrol R. He wheels it outside and young James sets about firing it up. It’s slightly reluctant so James senior potters off to find a plug spanner when suddenly, with an earth shattering explosion, it stops being a pretty classic bike and begins to explain, in words of one cylinder, all that is truly beautiful about bikes. Let this be a lesson to all that complain about their spoilt Sunday gardening tranquillity as a few modern sportsbikes buzz through their village. I’ve heard a modern GP bike at full chat, I thought it was animalistic but no, this is the sound to end all sounds. I wasn’t there to witness it, but I doubt the start of the Universe was any louder – it certainly couldn’t have been as impressive. James grins mischievously, like a boy again, and you know his soul is singing in time as the piston thunders up and down, beating out the rhythm of his life. A leaky carb tickler stops play, which is just as well since stopping the engine for any other reason would be tantamount to motorcycle murder. 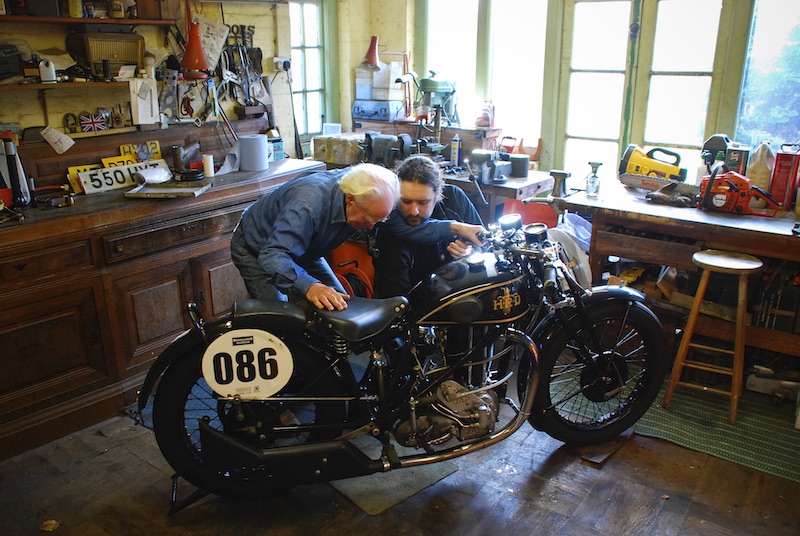 It’s not all classic racers and history here though, another shed opens to reveal his wife’s Honda CBR400rr, the ‘Blade as she fondly refers to it, her daily transport, a red Vespa, is gleaming in the sun. James bought a new BMW a while back, but of course it’s no regular BMW. The R65 is the LS model, rare as hens teeth and hiding in yet another shed, James points at it with his ever present pipe and offers it to his son as he doesn’t ride it anymore, it’s a real beauty from the days when BMW really meant quality. 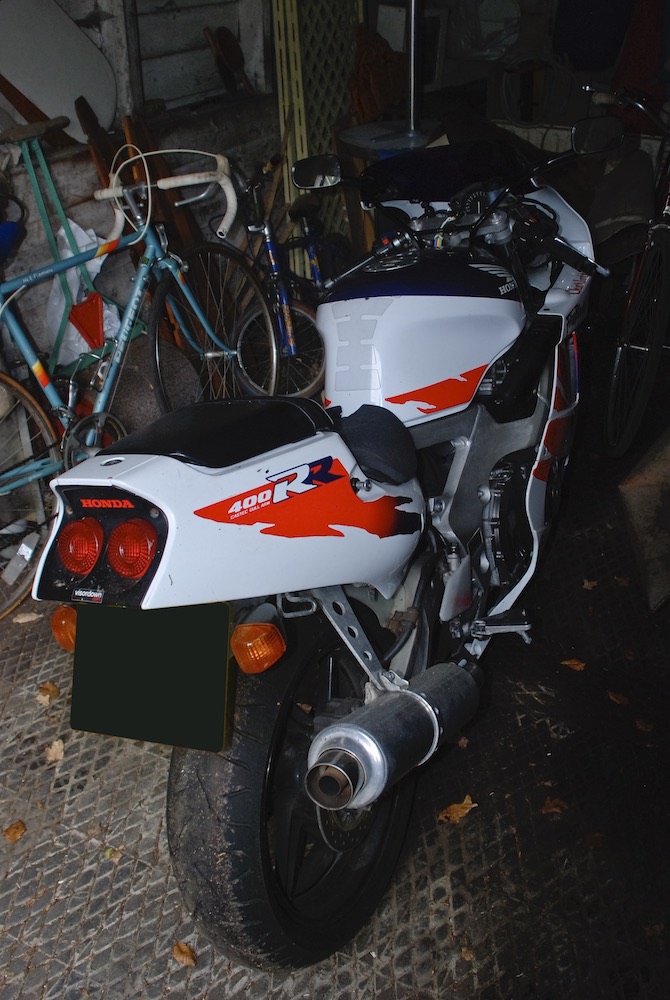 Young James asks his father what is in the workshop and he smiles knowingly. We walk through and his father says “let’s go and see a proper bike”. I can’t imagine anything topping the Japton. But then I see it and I understand. No bike you’ve ever seen before comes anywhere near this. Surrounded, as it is, with the kind of artefacts that would normally only be seen in a museum, but here they are real, spare parts, period posters, parquet flooring and that smell. One name evokes passion in any true biker’s soul, Vincent. We all know the legendary Black Shadow and the Black Lightning; the stunning engineering that, for many, represent the epitome of British bike design. But let us not speak their name in this company, for they are but mere motorcycle trinkets. Consider them not. Here, in James’ workshop is probably the first EVER racing Vincent. In all likelihood, the earliest Vincent in the country. And it is beautiful. Built in 1928 before Vincent HRD had made their own engine, a 500cc single (that would not arrive until 7 years later), until then they used Jap or Rudge engines. This one is a Jap. Everything about it is extraordinary, from the unfathomable rear suspension to the tongue and groove jointed frame near the headstock. I can’t take it home, so I take a lot of pictures. It is simply stunning. Wrenching myself away from it, I walk past the remains of the headstock from the Commando, the original iron piston from the old Triumph – now replaced with an aluminium one which makes it ‘run away with itself’ according to James – and a snapped con-rod belonging to something in the next garage. 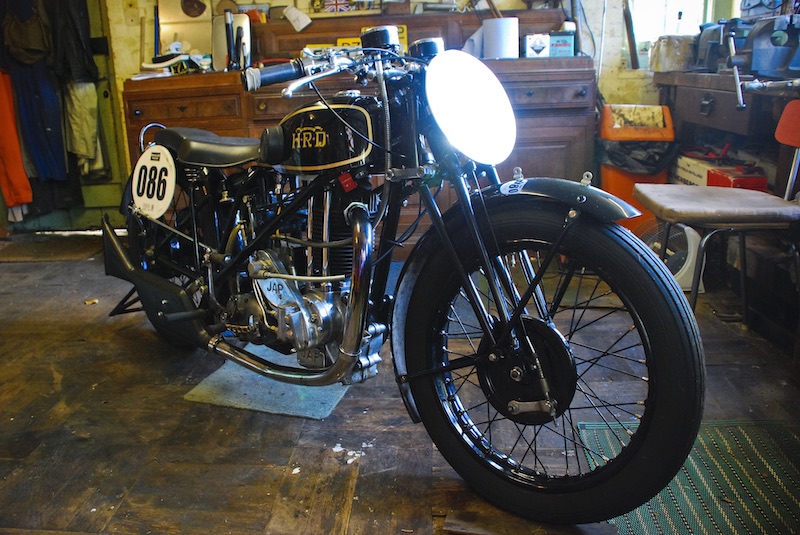 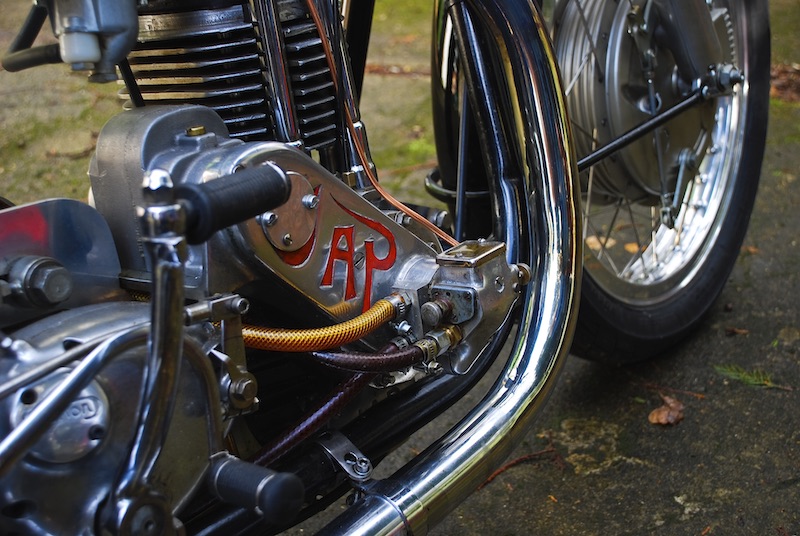 I’m now in a double garage, the first thing I see is a BSA Bantam, the first bike young James ever rode, but on my right is a car covered in a dust sheet, the source of the snapped con-rod. It’s an Aston Martin DB4. OK, so it’s a car, but if you’re going to have a car, it might as well be an Aston and if you’re going to have an Aston, it may as well be a DB4 – as driven by Michael Caine in the Italian Job. If there’s one thing I’ve learned about James from this visit, it’s that he has impeccable taste. 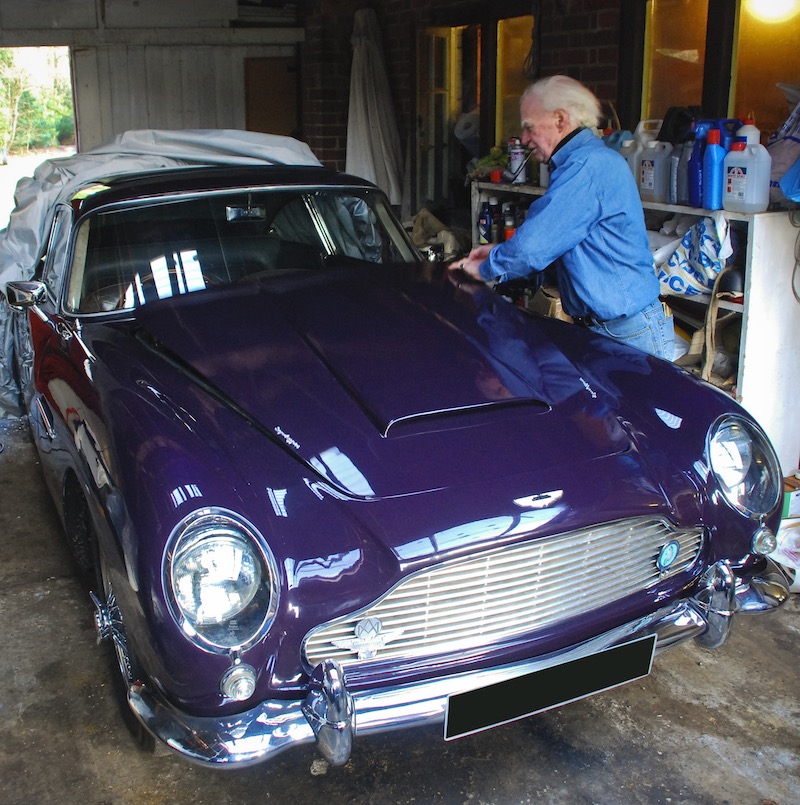 After watching film of his bikes at Spa over various years, it’s time to leave but not before James tells us about his next racing trip, he has entered a classic hillclimb event in Austria! He’ll take the Japton. “I’ll ride the ‘Blade” says Charlotte.

This article first appeared in issue 138 in April ’09 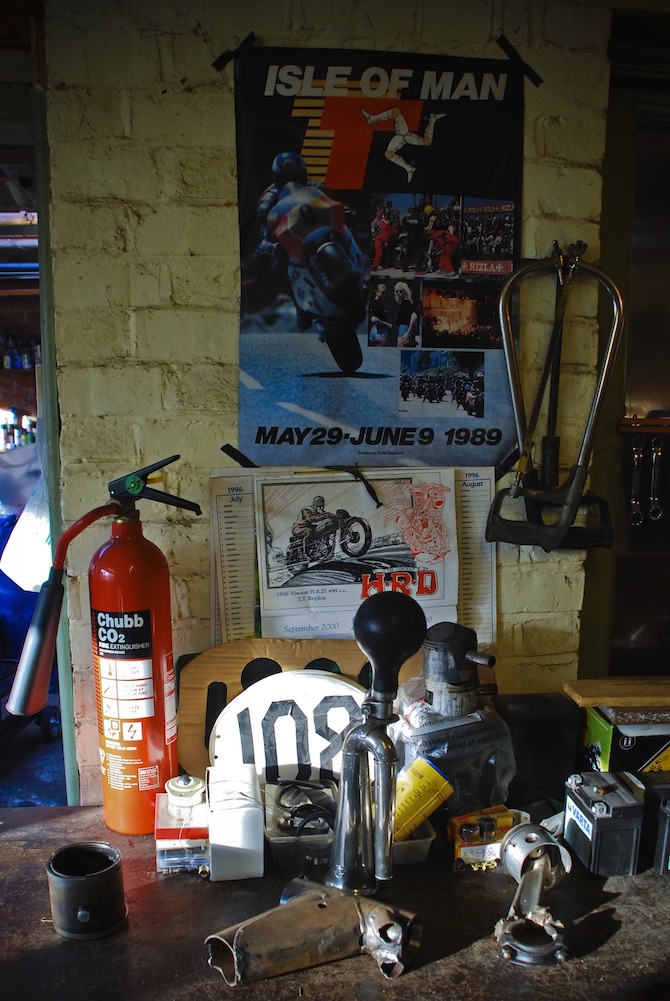 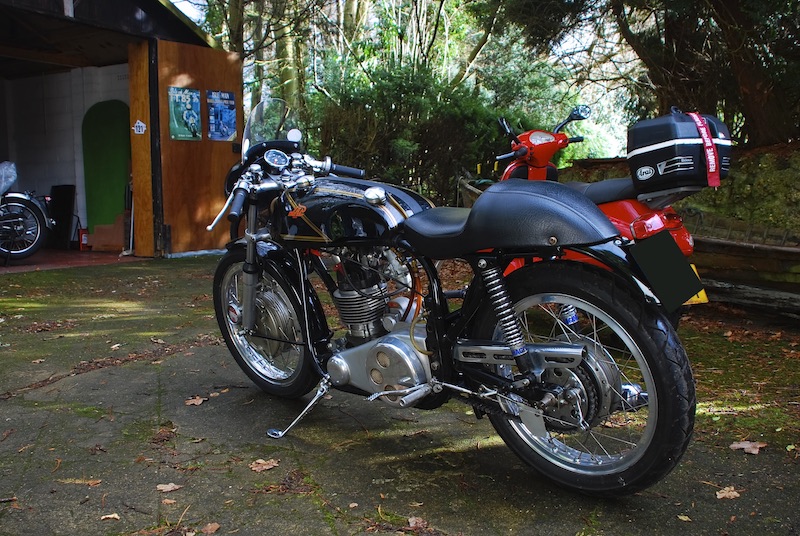