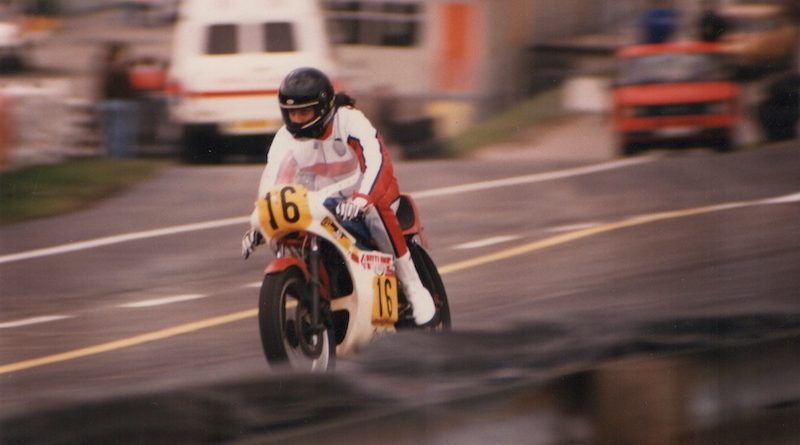 The Gurmeister phoned me a while back to ask if I would write a few words for a future issue. So I sat back and wondered what might fit the bill. 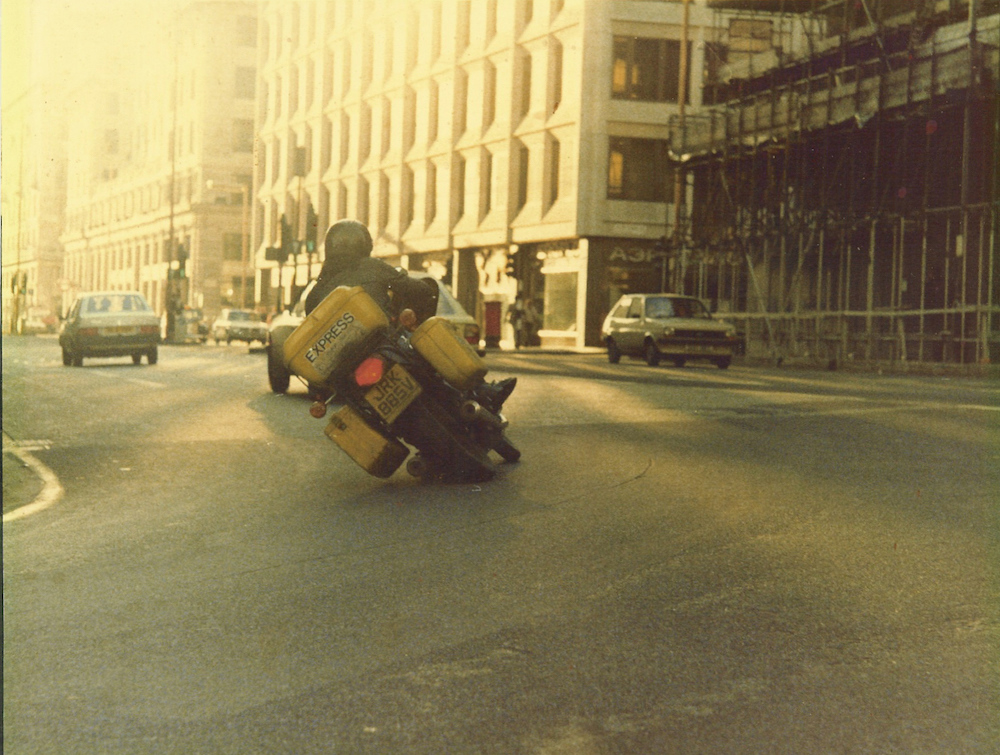 At first, I considered just telling some hoary old stories about the good old days of couriering; then I realised that Dave already does this himself and that two of us hopelessly lost in the memory lane postcode might be too much for you the poor reader.

I started to recall wild post-work Friday nights as eight company-owned GS425 roared around the west end firing off deliberate backfires, sounding like the James Gang as we went from pub to gig to curry house. We were all young and carefree, and just loved riding bikes; we’d work all day and then ride for pleasure in the evenings and weekends. If two or more of us rode together, the ride inevitably became the last lap of the TT or the first hour of Le Mans in our strange little minds!

I spent an hour or two chuckling as I recalled these halcyon days while I ploughed up the M6 on a mission to some sorry northern town. It suddenly occurred to me that 27 years after temporarily becoming a courier on a company bike, I was still making a living from moving stuff about. OK, these days I do it in a nice van with aircon and a CD, and I have my own customers, but I still regularly do jobs for that same company (Point to Point) which is now owned by a couple of guys who were once my fellow drivers. 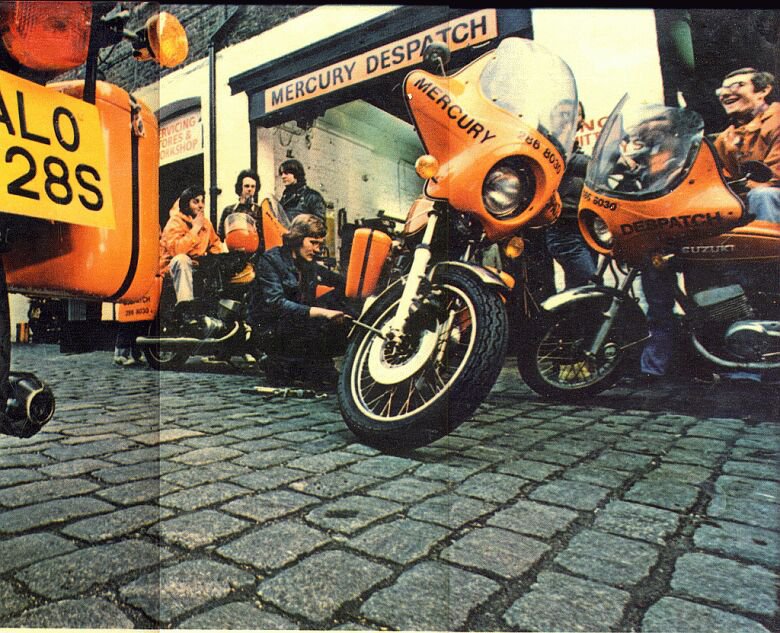 When I became a courier, an uncle rubbished the job “you can’t do that for the rest of your life – you should learn a trade”. Since that day I’ve survived at least three recessions, managed to buy a nice house in a nice place, travelled a bit, and I’ve raced at Le Mans on a bike for real. While friends who did learn a trade ended up being shafted as their jobs followed British industry down Thatcher’s toilet.

Over the years I’ve had a bash at controlling and managing, but still love the idea of going out in the morning knowing that you could be on the way to Scotland before lunchtime. I’ve been all over Europe at someone else’s expense, and although I’ve had my share of rubbish days and idiot customers, I’m still better off than the millions of people who drag themselves to a despised job each day with a heavy heart.

I began to realise how much of a pivotal moment it had been for me, when I sat in front of Sammy Rose (see issue 100) in October 1978 as he described the duties of a despatch rider at Express Despatch. Minutes later I wobbled away on a Suzuki GT250 (usual courier spec – handlebars bent one way, frame the other!) wondering why nothing was happening as I twisted the throttle. I had just reached the conclusion that it must have been out of fuel, when the motor hit the power band and the front wheel soared skywards as I hurtled between the startled punters and stallholders in Golborne Road. 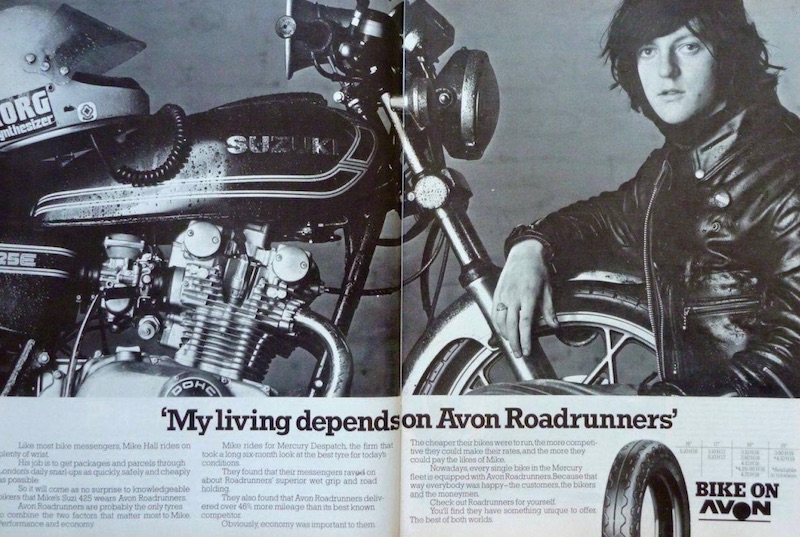 In those days we were all on PAYE, or at least the Slippery Sam mk3 version of it. I never did figure it out – it appeared that about 60% of my wages had been quietly diverted from the toilet roll budget. Maybe Sam had decided that his holiday home fund was more deserving of shekels than the Inland Revenue. Whatever was going on, we were paid in cash every Friday evening, retiring to the pub next door to plan the evening’s entertainment.

As I headed south again that night, it began to dawn on me that most of the important things in my life had come about from an interest in motorcycles in general, and becoming a courier in particular. Although I had no idea at the time, the people I met as a courier would change the course of my life: many of my present circle of friends can be traced directly back to those days, and most of the others were mutual friends of the first lot.

I first met my wife when she was a driver for Pony Express, and we both filled up at Store Street garage. I started bike racing in 1984 with encouragement from Steve Talbot (aka “Toolbox” – mechanic at Mercury and then Express) and met another bunch of idiots, some of whom are still good friends today. I live where I do, because we had taken a shine to the area in our racing days when we travelled up to Snetterton every other weekend. 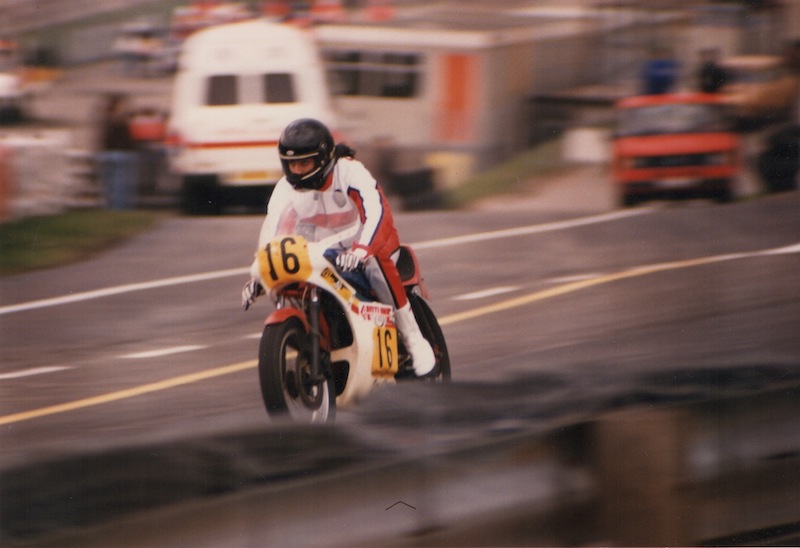 All my adventures with the NHS have been motorcycle related: a broken leg in ‘82 (sustained riding an RD250 up a staircase at a party!); a couple of collarbones on the track, along with two vertebrae and a dislocated shoulder at Oulton Park last year during my mid life crisis return to racing.

By the time I turned into my drive in the early hours, I’d started to consider how different (and dull!) my life could have been, had I decided to stick with my Mk1 Escort in the summer of ‘76, instead of buying a friend’s Honda CB125 to commute to my office job.

I’m convinced that a love of motorcycling in someone is generally a sign of an interesting personality (although some of the part number experts at owner’s clubs may disprove this). Is it a coincidence that most of the friends we have been drawn to outside motorcycling, turn out to be long-time bike fans?

Although motorcycling has changed immeasurably since I started out – for better (training, bikes that go, stop, and handle properly) and for worse (speed cameras, silly insurance premiums), its inherent character remains untouched. It gives me great satisfaction to see young riders like the Boy Biker of this parish embarking on this journey with the same wonder and excitement that I felt at his age.

Between his wheels lie the whole range of human emotions from despair and anger when his fifth puncture in two weeks has stranded him in the middle of nowhere at 2am on a November morning; to satisfaction and exaltation as a sequence of twelve dark woodland curves deposit him into the glare of the setting sun on the coast road above Chesil Beach.

Wherever the journey takes him, he can be sure that he’ll be going there with a bunch of interesting riding buddies. 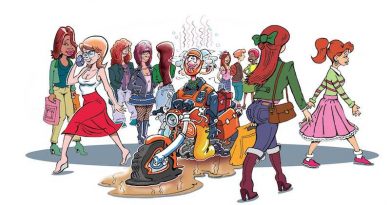 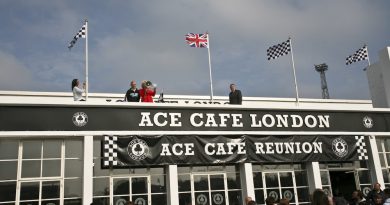 Ace Day at the Ace Cafe 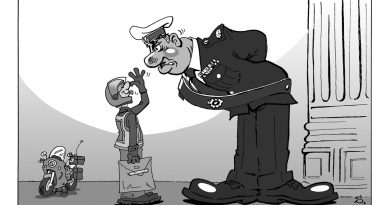 Not So Carin’ Sharin’