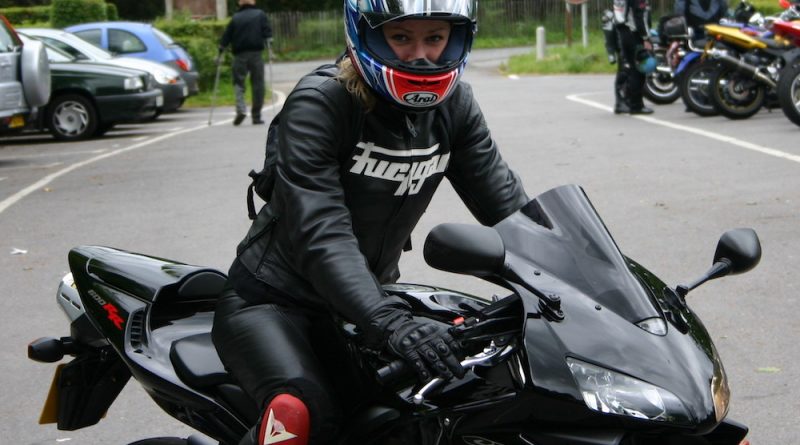 Last week I posted a couple of snaps in a Facebook bike group that I’d taken at the tale end of the Seventies. The photos featured a Yamaha YR5 and a Suzuki GT250 and although they were shot about six months apart, they both had the same attractive young woman sitting on them. 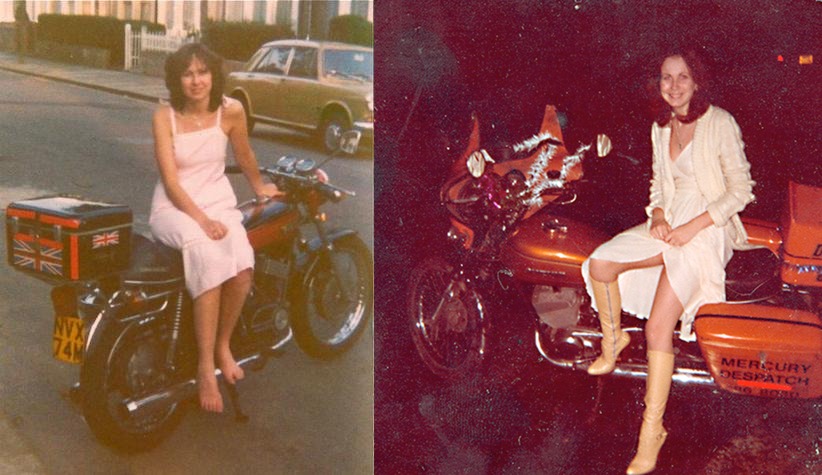 However this wasn’t because I’d bought into the adolescent male mentality that still exists over forty years later, whereby the marketing men and magazine publishers believe that draping a woman across a motorcycle, who’s tightly wrapped in Lycra, wearing very little, or preferably wearing nothing but a few interesting tattoos, makes the machine somehow look more desirable! 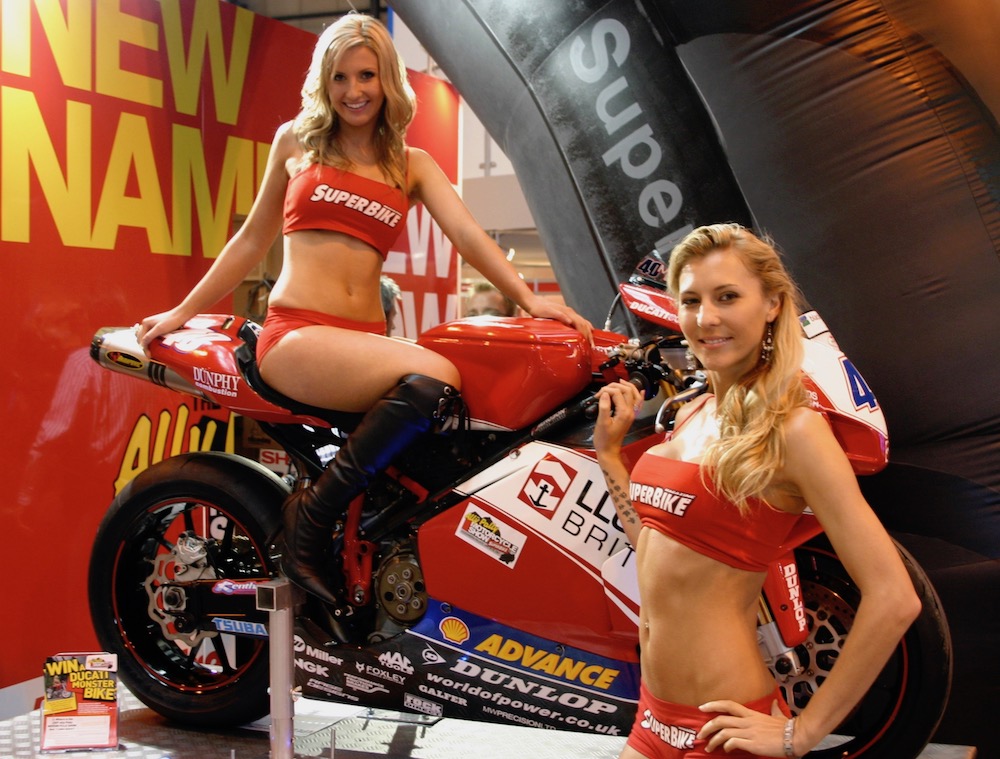 In my pictures it was the bikes rather than the woman that were the props. In fact if I hadn’t wanted pictures of Karen, who I was seeing at the time, I would never have had any photographic records of those old bikes!

But it doesn’t matter what my motives were because although the group is specifically designated for riders who are aged fifty and over, in among the many oohs and aahs about the classic two-strokes and the occasional complimentary comment about Karen, there were the inevitable rash of pubescent puns about “a nice ride!”, “I bet she goes!” and the like. 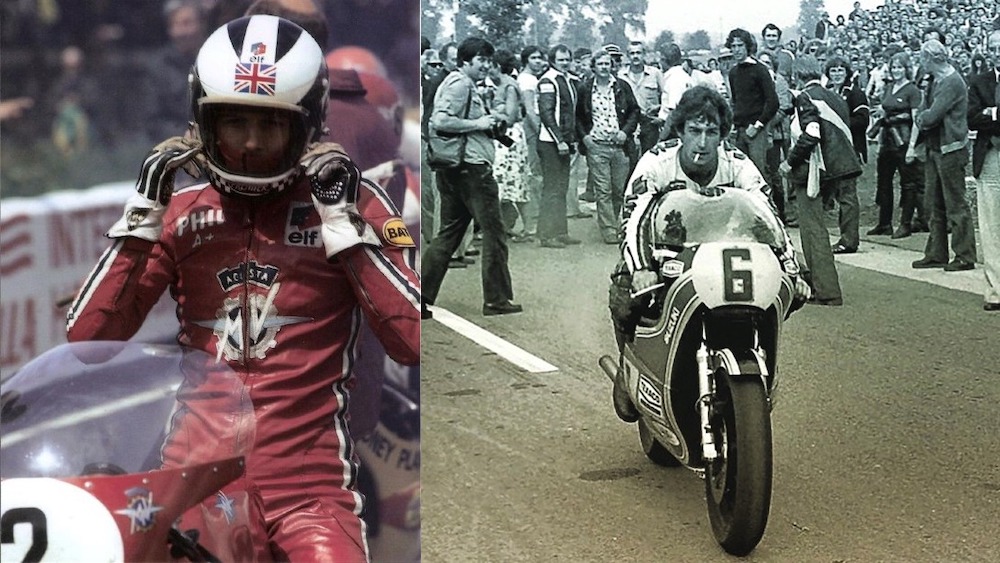 Which was hardly any surprise and in some ways the posters were in illustrious company; both Phil Read MBE and Steve Parrish have answered The Rider’s Digest’s ten Riders’ Lives questions, and the pair of them responded to the fifth one, ‘What was your most memorable ride?’ with variations on the “I forget her name” theme (although Steve Parrish did go on to add, “And British GP at Silverstone 1977. Crashed while leading with one lap to go. Got the sack from Suzuki for that.).

It would be wonderful to report that that sort of casual sexism was as far behind us as the heydays of their racing careers; but even today, in the third decade of the 21st century, you only need to check out the MotoGP grid, any motorcycle show anywhere, or the pages of the glossies to see what the motorcycling establishment thinks a woman’s role is. Is it any wonder then, that even now, women who aren’t inclined to just laugh along with the jokes and be one of the lads, are left feeling like intruders in some sort of big boys club? 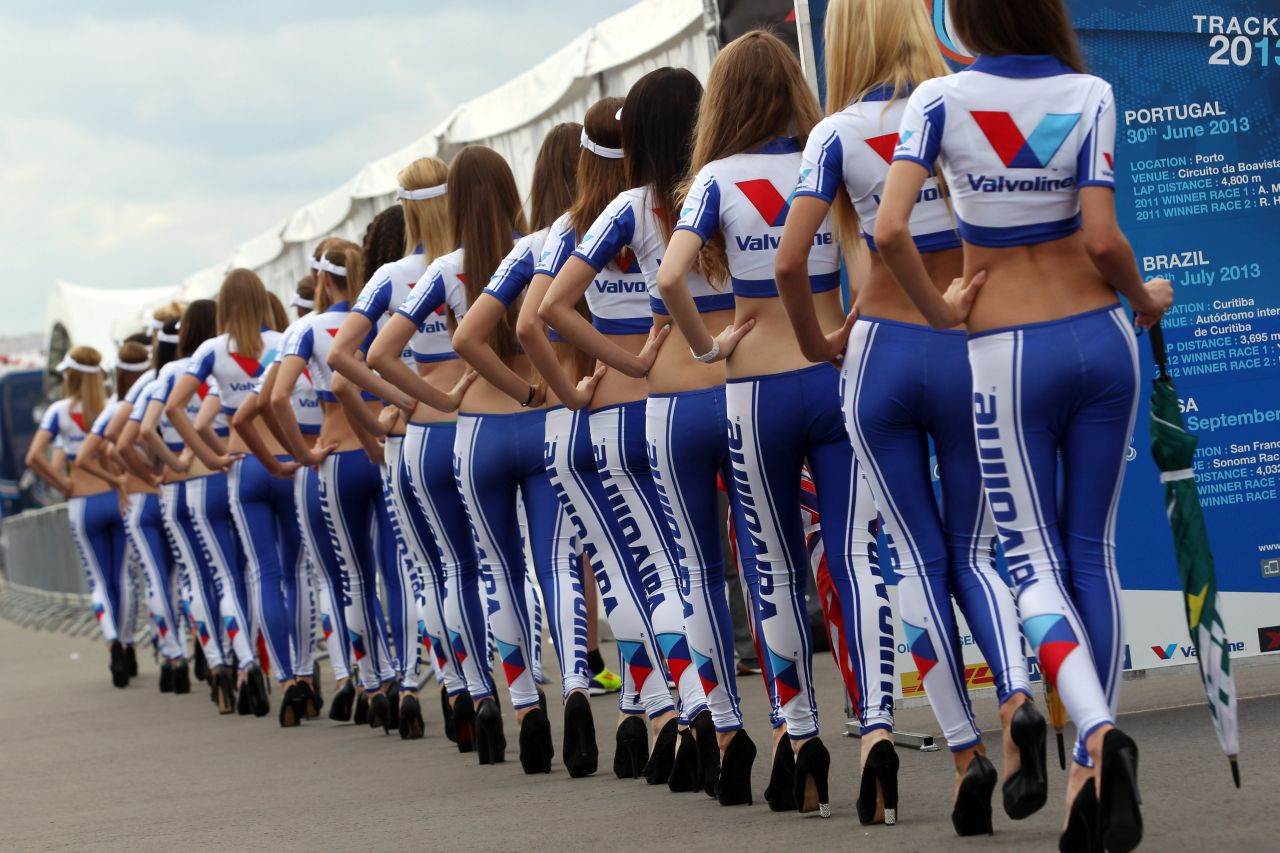 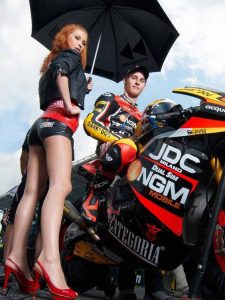 Of course there are plenty of ‘birds’, ‘tarts’ and ‘bitches’ who are happy to collude with the chaps and they will invariably be the first to dismiss their sisters as ‘snowflakes’ if they dare to complain; and any man who has the temerity to suggest that the occasional biker attitude might be offensive to women, or that some members of the ‘biking community’ could be just a teeny bit misogynistic, will be dismissed as ‘woke’, ‘gay’ or guilty of ‘virtue signalling’!

I’ve never really understood what ‘woke’ means? What’s the opposite, ‘comatose’? And although I happen to be straight, I’ve never understood why anyone who was comfortable with their own sexuality would consider ‘gay’ to be an insult? I was accused of ‘virtue signalling’ and ‘climbing on the PC bandwagon’ recently; but as I pointed out that couldn’t be further from the truth, as I’d been “pushing the fucking thing uphill for over thirty years!” As for signalling ‘virtue‘, I checked the definition to ensure that I hadn’t got it wrong for all of these years; but sure enough there wasn’t a single negative connotation.

Between issue 1 in August 1997 and issue 140 (the last and best printed edition I produced) almost twelve years later, The Rider’s Digest had only ever had three editors. Roger Tuson, the magazine’s founder, was responsible for ninety-eight of the first hundred issues; the other two – 57 & 58 – were down to another chap, who it transpired was fully bought into the idea that ‘sex sells’, so he bunged brolly dollies on the cover, introduced a new ‘Pit Broad’ feature, and hired Lycra lovelies to hand out copies at the Hanger Lane Gyratory! 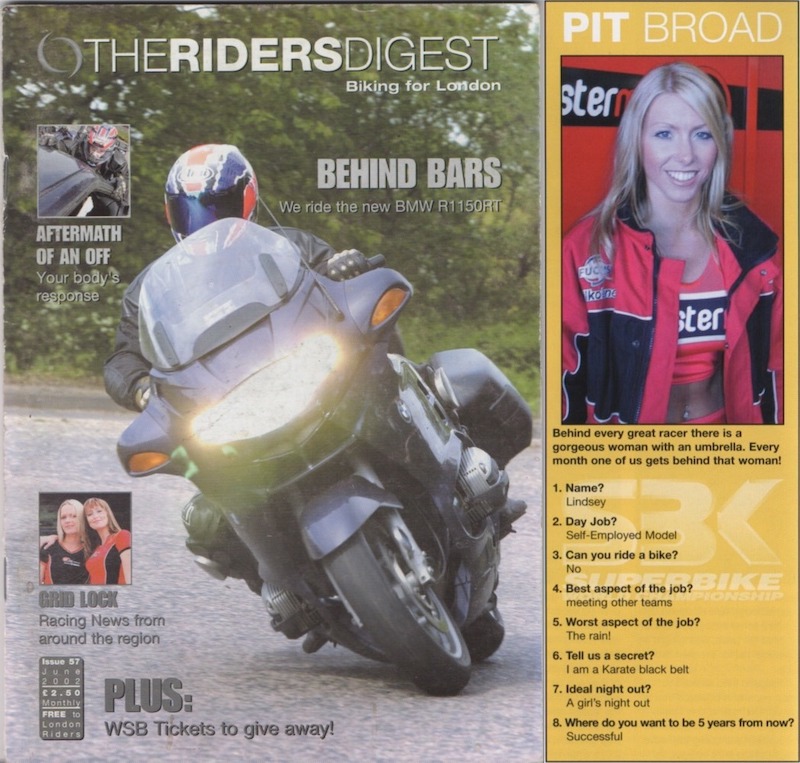 Fortunately Roger decided that if that was what was required to compete with the big boys, he’d rather not and went back to producing the same real-world, occasionally sexy, but never knowingly sexist, rag he’d been printing every month for almost five years; and when I took over the reins forty-three issues later in January ‘06, he knew me well enough to be pretty confident that I wouldn’t do anything to besmirch the Digest’s solid reputation – and I‘m proud to say that he is on record saying how satisfied he’s been with my stewardship.

It’s no coincidence then that in the twenty-three years since its inception, The Rider’s Digest has probably published more top-notch female contributors than all of the mainstream magazines put together and almost uniquely has featured women motorcyclists – as opposed to fluffy female decorations – on the cover on multiple occasions.

Just so we’re clear though; I wouldn’t have dreamt of objecting to the photograph that accompanied Wildcat’s Riders’ Lives responses; they were her answers and it was her choice of image – if she chose to reveal her glamorous side along with her biking credentials that was her privilege. 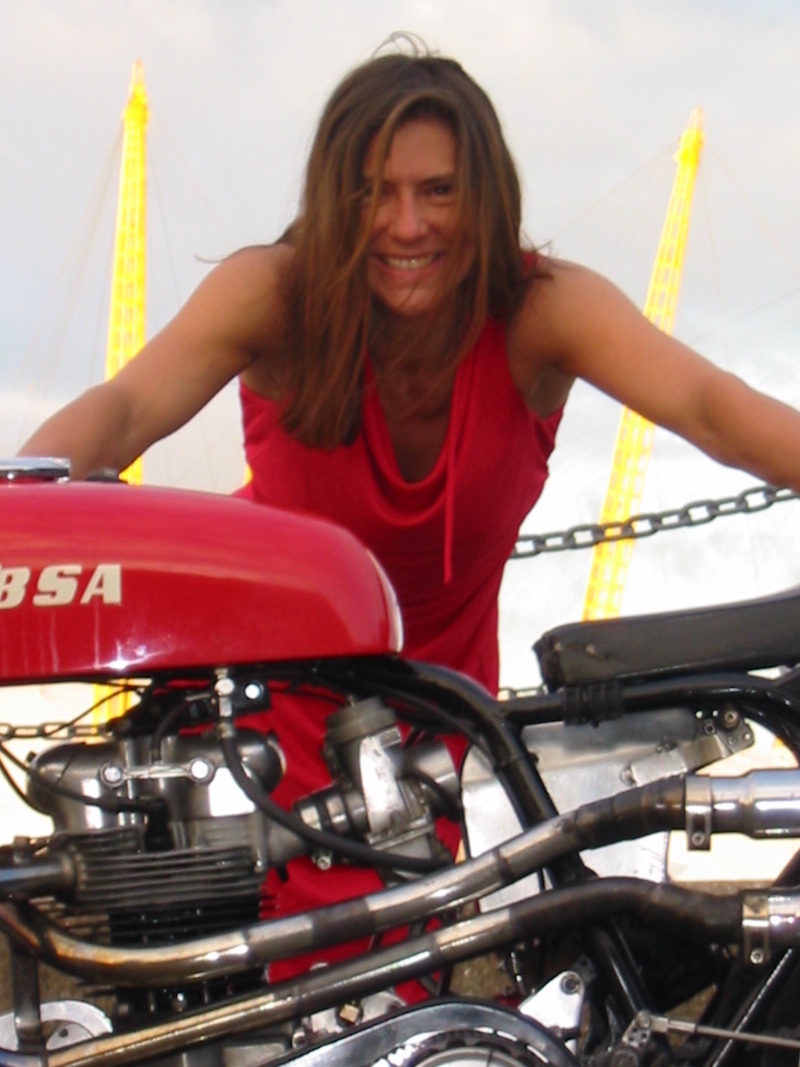 I was also quite content to help out dress designer Libby Rose (left) by photographing her collection (in fact truth be told, I rather enjoyed it) and once again, just like with young Karen, it was the bike that was being used and abused as a prop, while the model was the subject; but given that a bike – as much as you might love it – is an inanimate object, it’d be a serious snowflake who could find that offensive.

So what’s the morale of this story? Basically, I honestly don’t believe that the majority of men on machines are anywhere near as sexist as the small, but disproportionately noisy, macho dickhead brigade tend to suggest; but it still requires a lot of resolution and not a little bravery for a woman to challenge them – especially in the febrile atmosphere that tends to dominate in the kind of online groups I was referring to at the top.

The Rider’s Digest never set out to create a ‘safe space’ for women – or any other oppressed group for that matter – but on reflection that would appear to be what we’ve accidentally become, simply by our unwillingness to perpetuate lazy, atavistic isms; and if that means that we’ve been ‘virtue signalling’, then we’ve been guilty as charged ever since 1997!

Then again, it’s a very special sort of macho dickhead who believes that accusing someone of “behaviour showing high moral standards” is an insult; so the Neanderthals would appear to have a lot more in common with sad sack ‘Incels’ than the motorcycling mainstream. 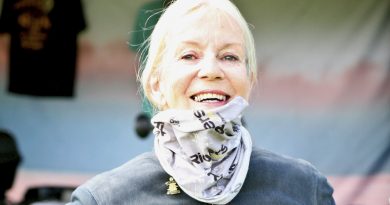 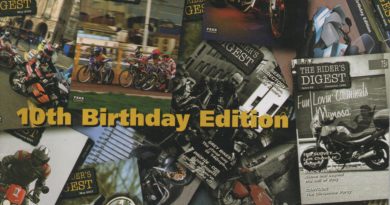 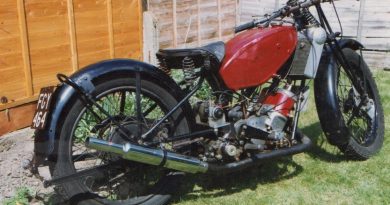