Almost forty years to the day since the comedy classic ‘Only Fools and Horses’ was first shown on our screens, unseen photos emerged of Peckham’s finest on location in the Kent seaside town of Margate, for the filming of the 1989 Christmas special ‘The Jolly Boys’ Outing’. 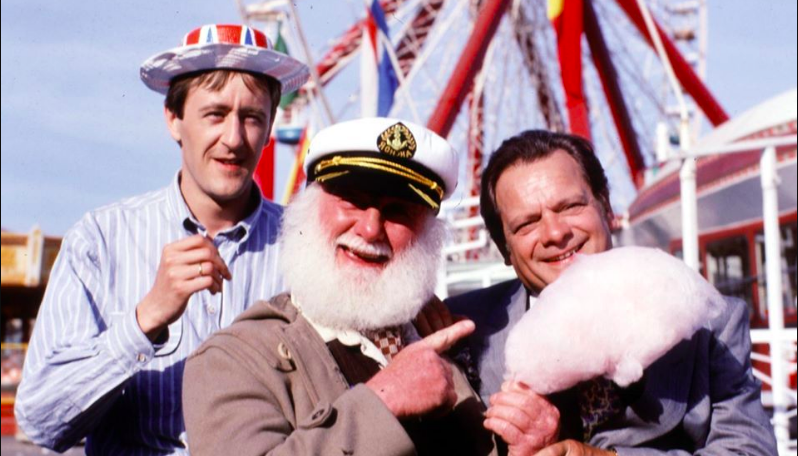 You may be wondering what this has to do with motorcycles, and indeed why you’re reading this on the hallowed pages of ‘The Rider’s Digest Live’.

Well I’ll tell you. The emergence of these photographs of Del Boy and his chums coincided with another spectacle that will go down in Margate’s history; the 2021 Malle Mile Beach Race. 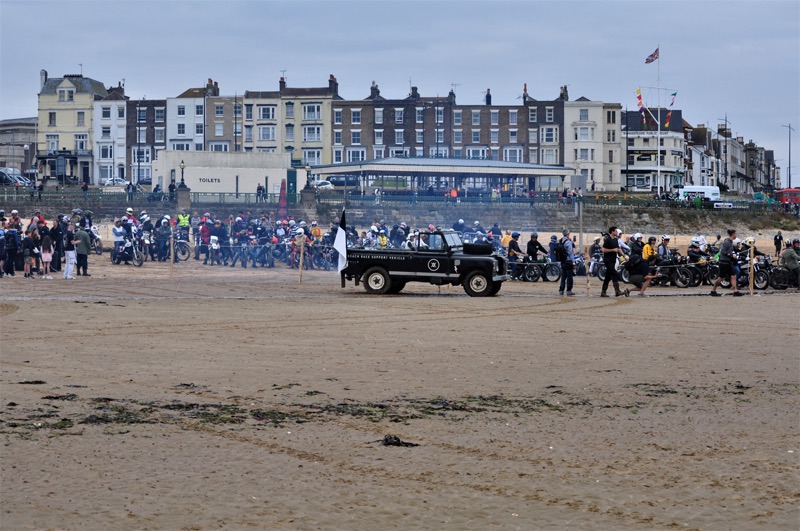 Yes, a group of likely lads and lasses from the East End, who along with their entourage descended on the Kent coast for jollity and high jinks, all for the entertainment of others. Just like the Trotters (who in the interests of pedantry I should point out came from Sarf East London). 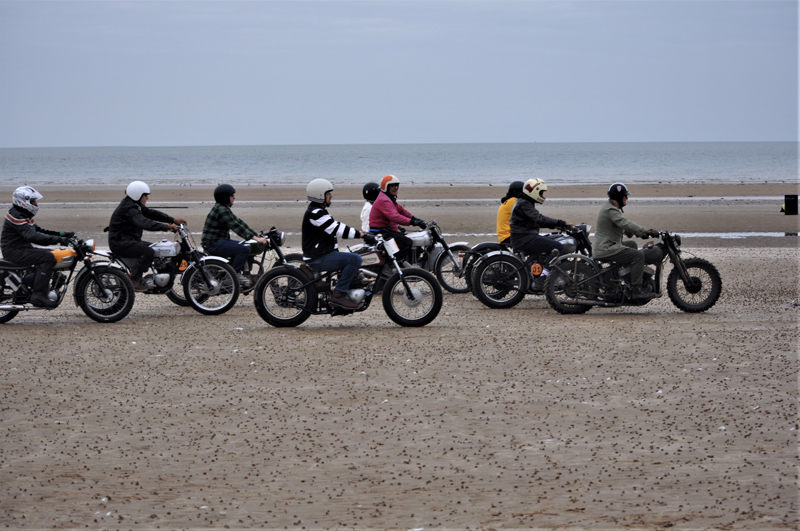 This isn’t the first time this event has been held on the golden sands of Thanet’s jewel in the crown; the event was bravely staged in 2020 amid many different kinds of adversity, including a global pandemic, howling winds and torrential rain, but it was all character-building stuff.

But it is the first time I’ve reported on the Malle Mile Beach Race at Margate, so with the experience of having covered both angles of the story I kind of knew what to expect. 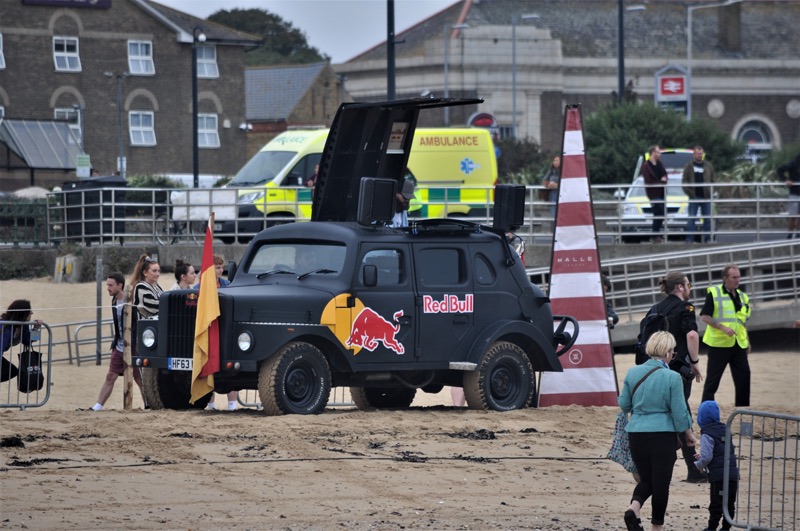 There were of course differences, the previous beach races I’d attended had been limited to quads and motocross bikes, and while there were a number of purposeful looking bikes and riders who looked as though they might be taking this year’s Malle Mile seriously – heaven forbid – they were I think probably in the minority. 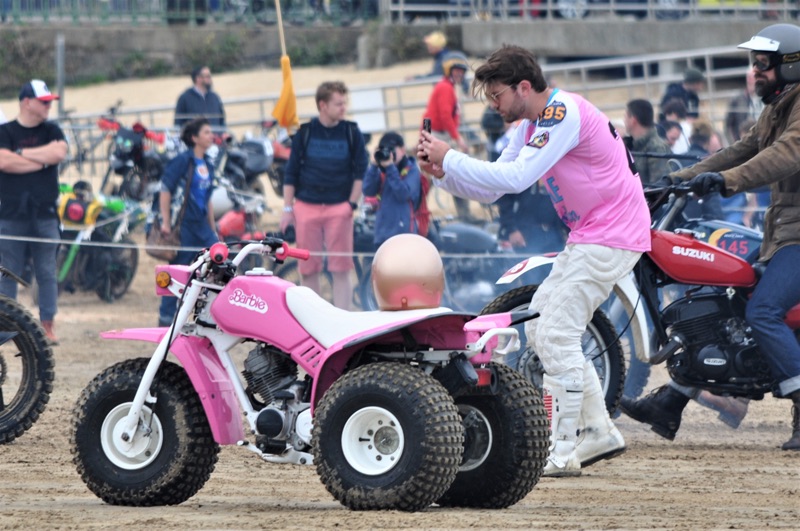 In contrast of course, there were any number of machines present that were almost totally unsuitable for competitive riding on a beach. 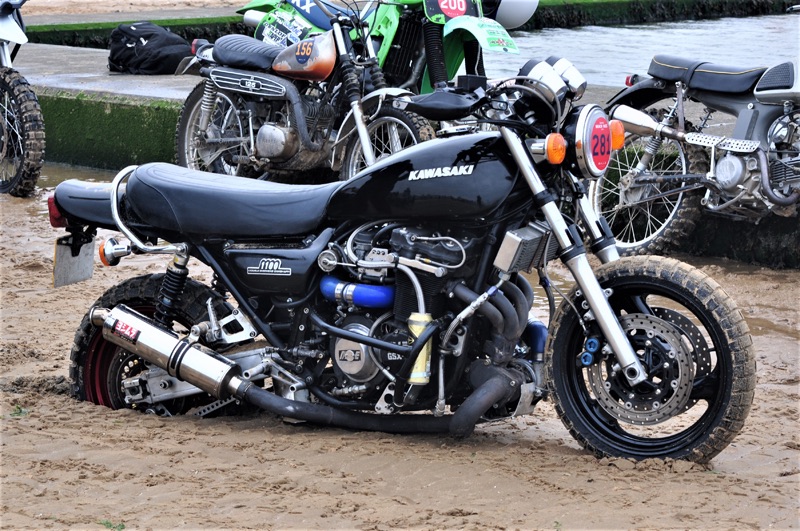 These ranged from a Puch Maxi moped, several large capacity street bikes, a brand-new Triumph Scrambler and even a vintage Harley-Davidson, complete with foot clutch and hand gear change.

Talk about making things difficult for yourself. 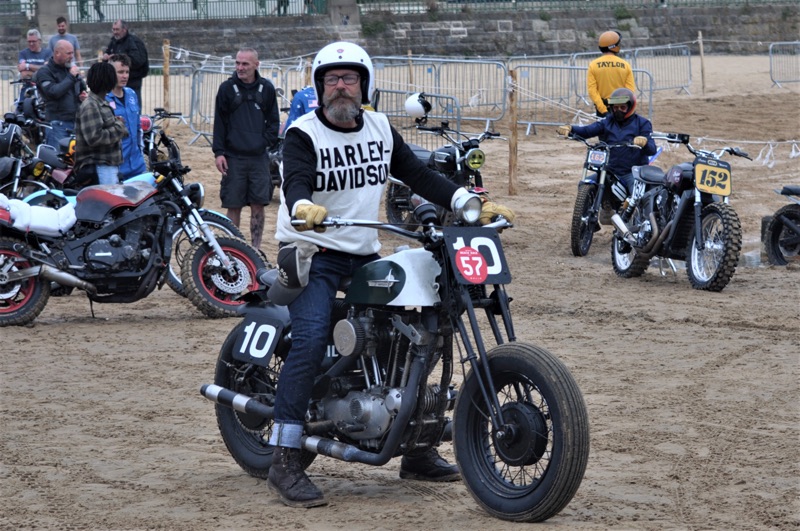 As the rather cheeky commentator noted, the rider may have been as old as – or even older than – the bike.

Due to other commitments, I was only able to attend for the Saturday morning races, comprising ‘The Sprint Race’ – a 1/8th of a mile ‘head to head’ drag race heading east from the tidal swimming pool (in which I once caught crabs) across the beach towards the Turner Contemporary art gallery. No crabs caught there by the way. 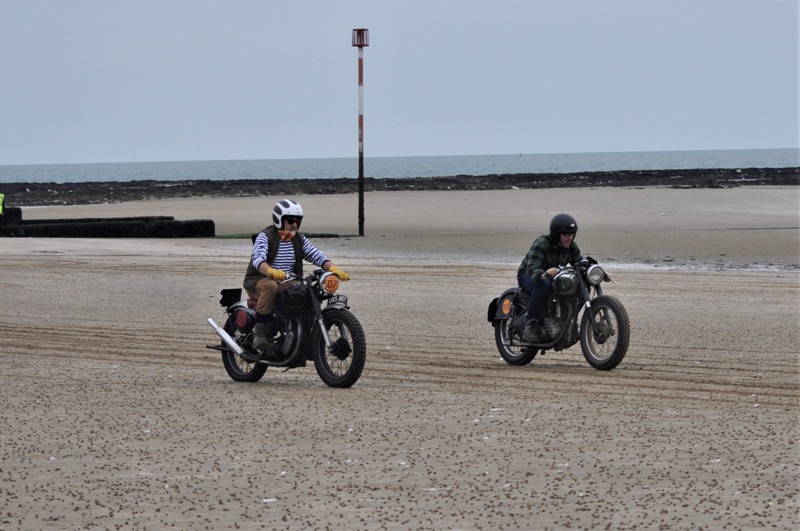 For this race, the riders waited for the ‘off’ with their left hand resting on their crash helmets, bikes in neutral.

A little further toward the waves the ‘Malle 100’ was held.

This involved up to 10 motorcycles at a time racing anti-clockwise for several laps around an oval circuit after a ‘Le Mans’ style start, with the riders running across the track to mount their trusty, and in some cases rusty, steeds, held in readiness by an aide, possibly a wingman or even a batman. I’m unsure of the correct terminology. 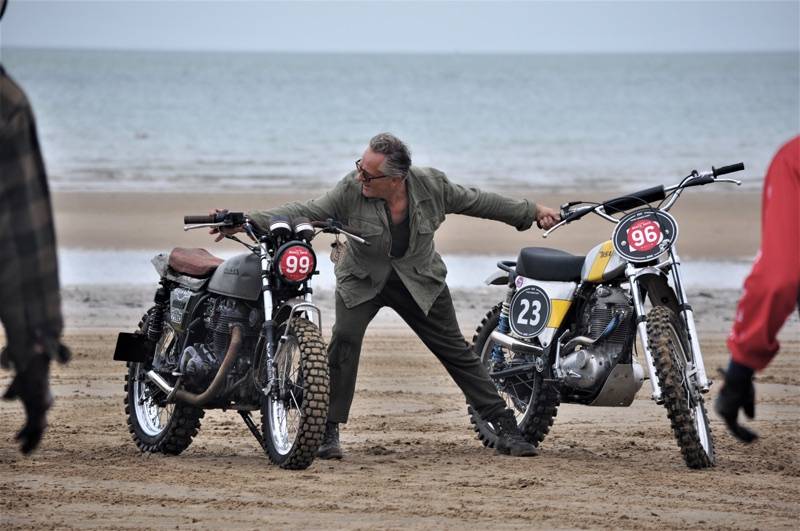 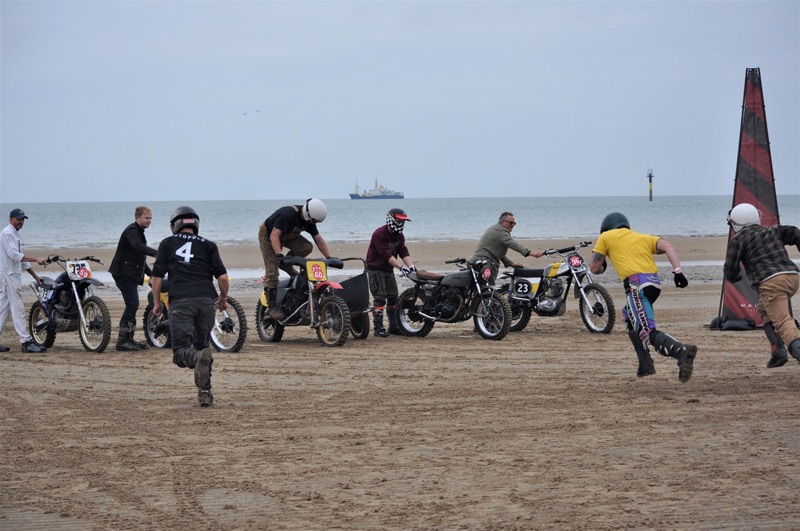 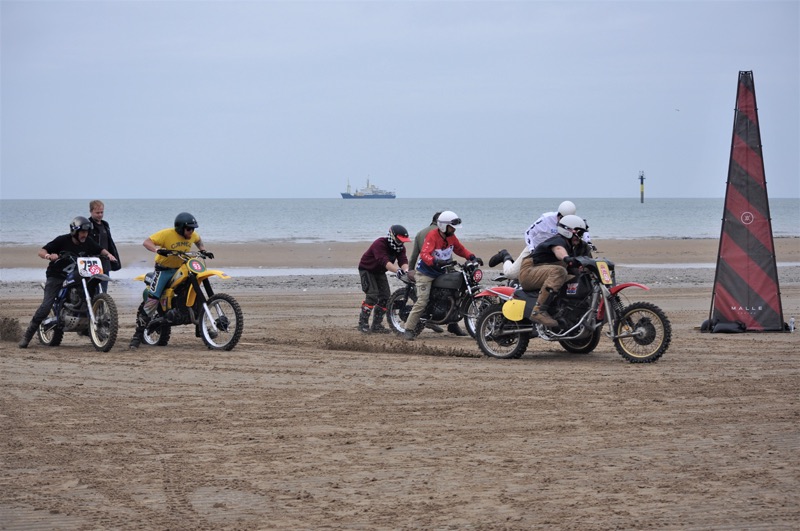 The races were respectively started by the drop of a flag. 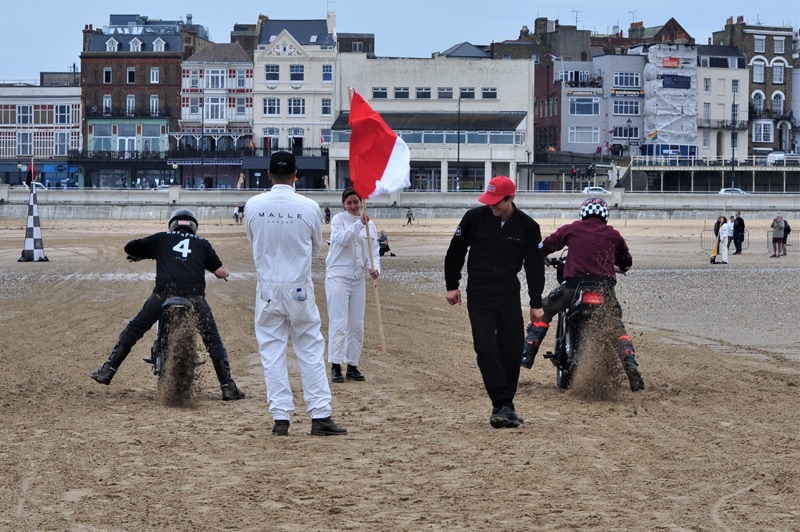 The machines in each race seemed to be loosely matched and released in various classes. Pitting an ancient Puch Maxi against a fully-fledged crosser just wouldn’t be cricket, after all. 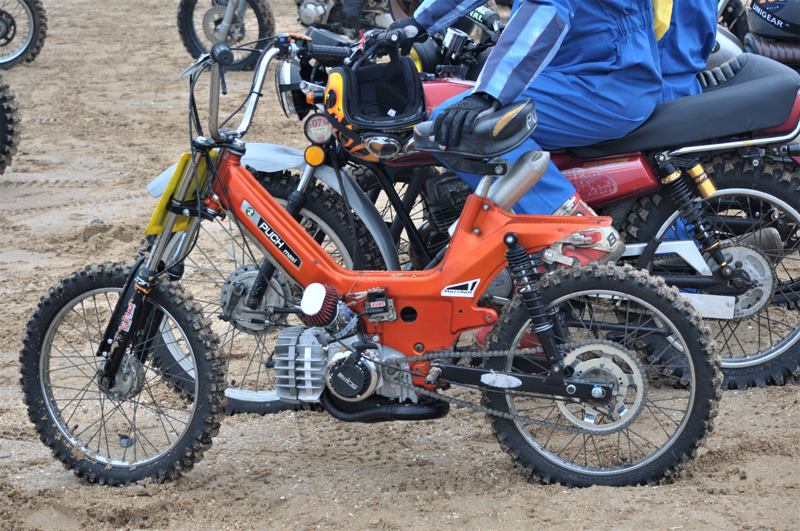 The proceedings were a little late in starting, as with a keen eye to attention for detail, the Red Bull disco Jeep – vital for supplying the ultra-cool sounds to accompany the racing – had become briefly stuck in the soft sand.

Everything was done in the best possible taste with a good deal of style and a lot of flair. The organisers appear to strive for a sort of 1950s chic, with marshals wearing baggy black or white boiler suits, with lots of flag waving and vintage style posters and logos advertising the weekend. It’s all very hip. 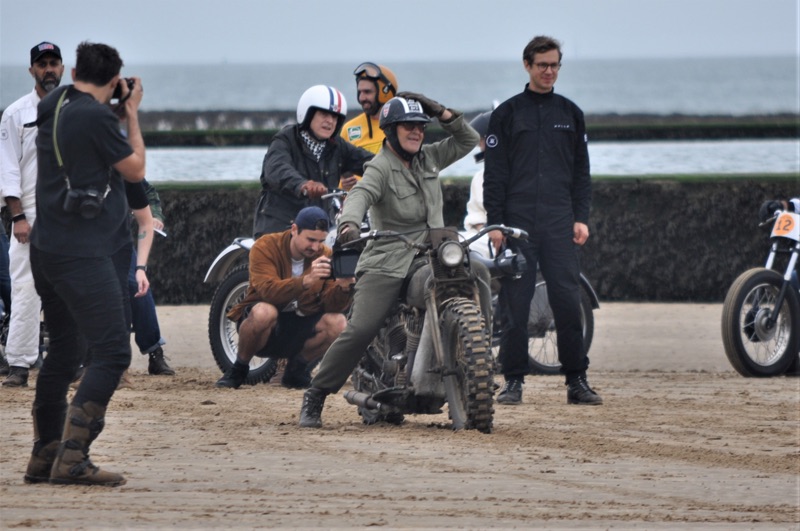 This event is all about the spectacle; video crews were in abundance, and it amused me greatly to be asked by the head race steward to remove my hi-visibility waistcoat (essential for photographers at the previous Margate Beach Races I’d covered) because it ‘wouldn’t look right’.

While the racing was undoubtedly spectacular, I’m not sure it was being taken very seriously by most. But wherever you are, from Glorious Goodwood, Hyde Park Corner or a deprived inner-city street, if you line up two motorised vehicles side by side and drop a flag, a race is what you will get – even if it is between two fully grown men riding Honda monkey bikes on Margate beach. 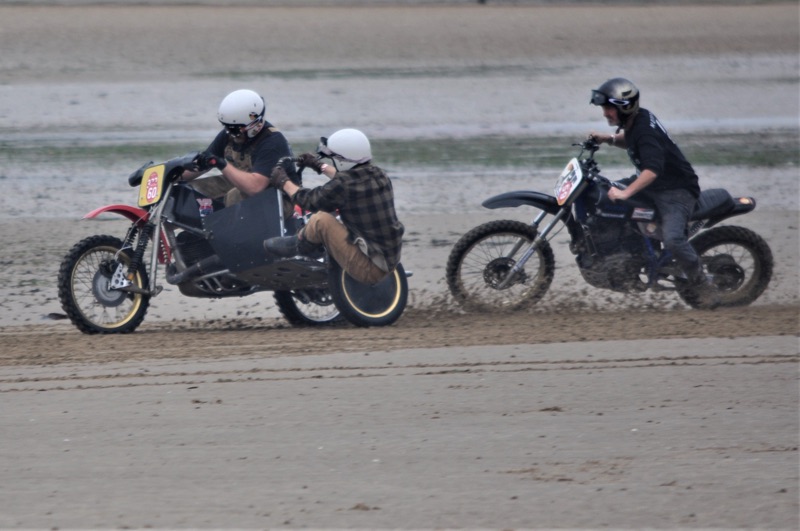 And that, dear readers kind of sums up The Malle Mile Beach Races; as far as I’m aware this isn’t a heat in a continuing championship, nor are serious race teams involved. So while being first across the line gathered you some serious bragging rights and possibly a trophy of some sort, I don’t suppose anyone other than those taking part were unduly interested in the results. 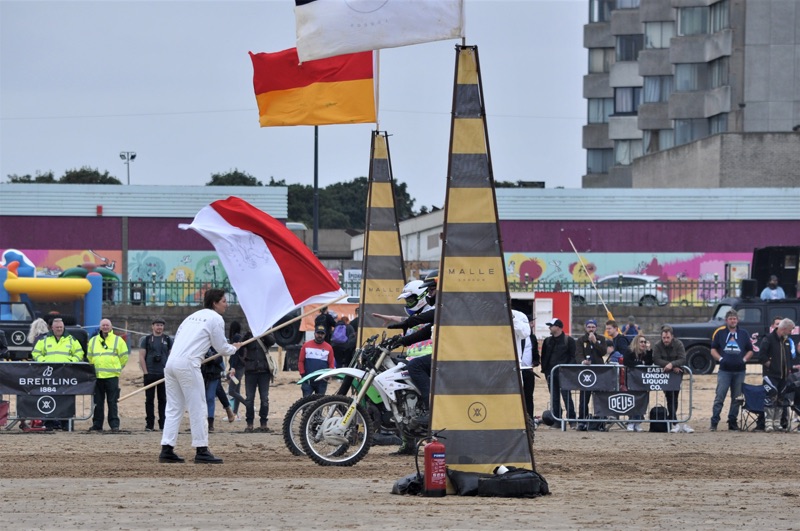 But the programme did promise a full weekend for the competitors and their teams; there had been a party the night before and there was due to be an awards ceremony later in the day – followed by another party of course.

The following day there was a rally from Britain’s only desert at Dungeness, along the coast, back to Margate, and as most of the machines taking part were street legal (some interpretation may be required here) it would probably have been quite spectacular. 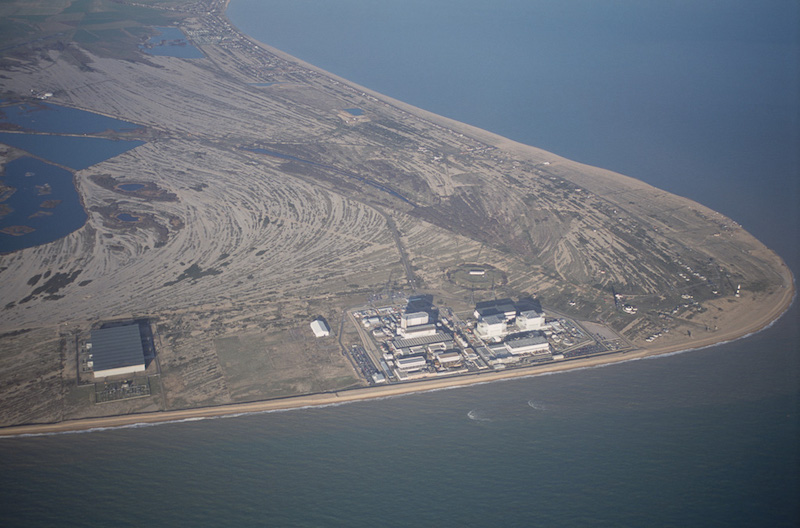 In the days since this colourful weekend by the sea, I can’t help wondering how many of the machines taking part were meticulously stripped down and all traces of sand and salt water carefully removed before servicing, greasing and replacing parts worn away by the coarse grinding paste created by a combination Margate beach and grease.

I have a strong suspicion that many were simply put away ready for the next event, bearing the hard won ‘patina’ of a dirty weekend or perhaps continued to be ridden as an authentic daily hack. 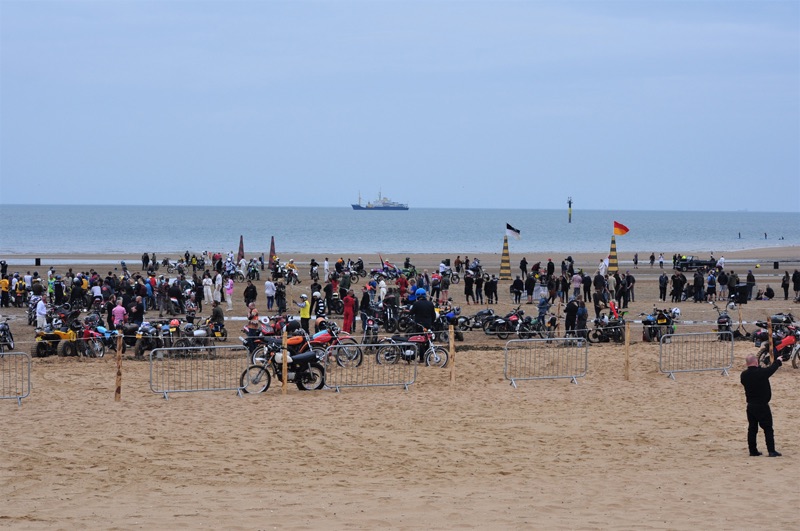 It doesn’t really matter though, the whole idea of the Malle Mile was to go down to the seaside and have some fun, which I’d say was mission accomplished.