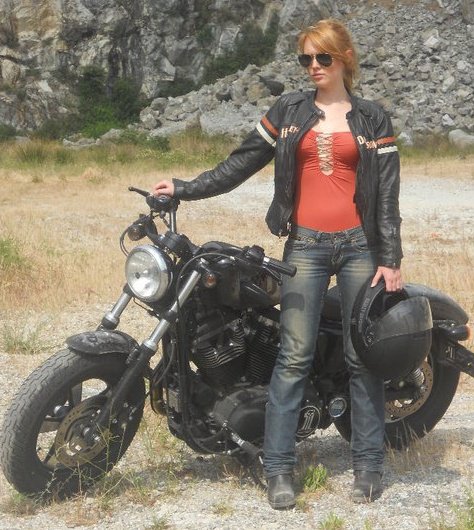 I grew up on the back of my Dad’s bike and we spent weekends riding to bike meets, drinking tea and eating bacon sarnies. I loved the bike crowd from day one and I still think that the people are the most important thing about motorbikes.

I have my dream bike already but I love customs too. I am currently the Youth Ambassador for Shaws Harley Davidson in Lewis who build some awesome examples with the help of forward thinking painters Image Design Custom.

Since I’m still a relatively new rider corners are a real learning curve (excuse the pun). I rode from Brighton to St Tropez for the HOG Rally in May last year and over one of the mountain ranges I very nearly ran out of fuel up a 180-degree zigzag route. It was a close call but I made it to the fuel stop by coasting on the straights!

Riding for 4 days in Arizona USA through Phoenix, down to Tucson and then back up through the Apache Forest. Amazing sights; a must for any biker.

I’ve recently become addicted to Sons of Anarchy and bought the soundtrack, which is a mix of heavy rock and metal ballads. Although, Chase and Status is good for windy roads!

The freedom, isolation and independence when riding is unbeatable. Although, the people really do make the sport and I am yet to meet a biker I don’t like.

The rain and the cold isn’t the most spectacular aspect. However, after a long ride in the wet stuff when you reach the destination you do have a real sense of achievement and, after all, we’re all waterproof!

I’d like to see more young people getting into bikes, it really isn’t on their radar as much as it used to be. I’d also like to see the CBT become compulsory for all road users, I think it would give a lot of drivers an insight into the world of biking.

I’d like to think I have inspired people to take up and enjoy motorcycles and if I have opened the eyes of just a few then I would be happy with that!